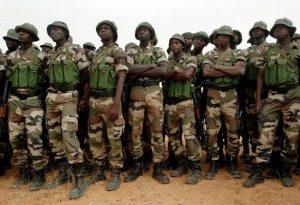 The House of Representatives has resolved to investigate the alleged mass resignation of soldiers from the Nigerian Army, warning that it will worsen the security crises across the country.

It was titled, ‘Need to Investigate the Purported Voluntary Resignation of Over 365 Soldiers from the Nigerian Army.’

The figure is actually 356, according to a memo from the aggrieved soldiers to the Chief of Army Staff, Lt. Gen. Tukur Buratai, dated July 3, 2020, with Reference Number, NA/COAS/001, quoting the Harmonised Terms and Conditions of Service for Soldiers/Ratings/Airmen (Revised) 2017.

Adopting the motion, the House mandated its Committee on Army to “investigate these allegations and report back in one week.”

Moving the motion, Monguno recalled that on June 22, 2020, a Lance Corporal in the Nigerian Army, Martin Idakpein, published a video on the Internet in which he condemned the lackadaisical attitude of the Chief of Army Staff towards the attacks and killings of civilians and soldiers as well as the untold hardship soldiers face while conducting combat operations.

Monguno said, “The House is aware that on several occasions Nigerian soldiers have disobeyed orders from superior officers in protest against poor welfare arrangements and alleged embezzlement of allowances due them by their superiors. There have been cases of mutiny resulting in sporadic shooting and attempt lynching of senior officers.

“The House is concerned that not too long ago, the General Officer Commanding, 7 Division of the Nigerian Army in Maimalari, Major General Victor Ezegwu, escaped being lynched by rampaging soldiers for leaving them with neither food nor water while fighting in the northeastern part of the country for two days.

“The House is further concerned that on the 3rd of July 2020, via a (a memo with) Reference Number NA/COAS/001, 356 soldiers, which is a battalion, serving in the North-East and other theatres of operations, wrote to the Chief of Army Staff, asking for voluntary retirement from the force and citing loss of interest as reasons for their retirement.”

The Chief Whip stated that the House was disturbed that military sources had attributed the massive resignations to loss of morale, unimproved allowances, mass casualties in the hands of Boko Haram terrorists due to lack of intelligence apparatus and fighting equipment as well as poor welfare packages for them and their families by the army authorities.

He said, “The House is further disturbed that instead of the Army authorities to see this action as indicative of a general discontentment within its fold and look for possible ways in solving this impending crisis that will further diminish the strength of our army, the Chief of Army Staff, via a 17-page circular signed by Brig-Gen T.E Gagariga, graciously approved the voluntary retirement of a battalion of aggrieved soldiers in one fell swoop.

“The House is worried that if this palpable drift currently ravaging the Nigerian Army is not brought under checks and control by nipping the influx of able ex-army officers into our society without job security, it may become a serious security threat and an impending military mutiny that may imperil our democracy, hence the need to urgently tackle this impending menace.”