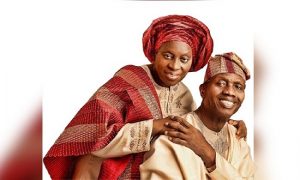 The General Overseer of the Redeemed Christian Church of God, Pastor Enoch Adeboye, has drawn the ire of feminists on social media over a birthday tribute to his wife.

Adeboye had in a message on Monday praised his wife, Pastor Foluke Adeboye, aka Mummy G.O, for her many sacrifices in their marriage.

In the tribute, which was also included in the RCCG daily devotional, ‘Open Heavens’, Adeboye described his wife as an embodiment of the virtuous woman described in the book of Proverbs Chapter 31.

Adeboye, who has been married for over 50 years, said his wife still cooks for him and is submissive.

He said many husbands of today misbehave because their wives fail to show them the respect that they deserve.

The pastor wrote, “The husband is the head of the wife. No matter how educated or successful you are, your husband is your head and you must regard him as such at all times. It is a terrible thing for the husband to feel that his wife is his head. Many men are misbehaving in their marriage because they want to establish that they are the head of their wives.

“Also, my wife is my number one fan. She wrote in the book ‘Mathematics of Marriage’ – which we coauthored, that as my help meet she knows she cannot help me without my instructions; so when they come, her response is ‘Yes sir’.

“Busy as she is, she still cooks my meals and serve me herself. Many young ladies these days leave everything to the house help. My wife still trims my nails for me.”

Although the message was well received by many of Adeboye’s followers, several feminists on social media criticised the cleric for promoting patriarchy and male chauvinism.

On Twitter Adeboye was trending at number one on Tuesday amid the raging controversy.

@_Toseen_ tweeted, “If marriage is going to be how Baba Adeboye described it, then f**k it. I cannot.”

@benxta_ also tweeted, “I can’t believe Adeboye really sat down and found a way to make his wife’s birthday about himself and his power over her. A simple ‘happy birthday, my love’ will do next time, please.”

@ehssayy stated, “No one turned it into a gender war. It’s your wife’s birthday and yes I know the woman has chosen her path in marriage but if that’s how you praise someone you’re in love with and is supposed to be your wife, then it’s just sad.”

“The definition of wife material in our country is a slavery woman. Acts like doll baby, you’re a good woman,” @prettyb26275331 tweeted.

However, thousands of Tweeps came out in support of Adeboye.

Social media influencer, Japheth Omojuwa, said it was unfortunate that some youths could attack Adeboye who is a respected cleric.

A tweep, Dipo Awojide, wrote, “Listen to Pastor Adeboye when he speaks. The man is old, wise and experienced. You might not agree with everything he says, but his messages are usually filed with wisdom for those who pay attention.”

@Tifeofficial tweeted, “Normally, Women are supposed to be submissive to their husbands. Pastor Adeboye was just stating facts and appreciating his wife for being submissive. So, it’s stupid to insult him, when he was just being right. Plus: If he was a terrible husband, submission would have been hard for her.”