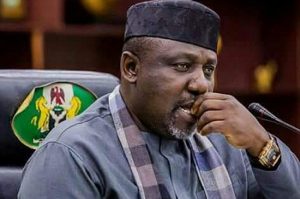 The Imo State Attorney General and Commissioner of Justice, Cyprian Akaolisa, has advised the numerous panels set up by the state government to investigate the eight-year administration of former Governor Rochas Okorocha, to suspend their proceedings.

The AG’s lawyer, Debo Ikeusan, said this on Tuesday at the Federal High Court in Abuja while reporting compliance with an earlier undertaking to halt the proceedings of the panels pending when the court would determine whether or not it had jurisdiction to hear the suit instituted by Okorocha.

Okorocha had, through his lawyer, Oba Maduabuchi (SAN), during the previous proceedings of July 8, 2020, urged the court to make an order of interim injunction suspending the panels’ proceedings.

But Justice Mohammed rejected the request.

He said he would rather go by the undertaking made by Mr Joseph Mola, who appeared for the AG and members of the various panels at the July 8, 2020 proceedings, to advise the AG to inform the panels to halt sittings in respect for the pending court case..

The judge had then adjourned till Wednesday for report of compliance with the undertaking and for the AG and other defendants to make their applications challenging the court’s jurisdiction formal.

Addressing the court on Wednesday, the AG’s lawyer, Ikeusan said, “We have advised the panels, especially the 3rd to the10th defendants, who are the members of the probe panel set up by Imo State Government, to desist from any action or conduct that will overreach or prejudice the determination of suit.

“Equally following the advice of Your Lordship, the 2nd to 48th defendants filed their preliminary objection.”

But Okorocha’s lawyer, Emeka Okoye, insisted that the panel, particularly the Justice E. C Iheaka-led Imo State probe panel on awards of contracts, had continued with it proceedings up till Monday.

In response Justice Mohammed asked Okoye to file an affidavit deposing to the fact that the panel continued sitting.

The Economic and Financial Crimes Commission sued as the 1st defendant in the case was not represent by any lawyer on Tuesday.