Following the outrage and confusion from the video, our research team decided to go into details and ascertain the real situation.
The team led by our chief technology officer and senior correspondent, Eberechi Okeke went to work on the story.
It was discovered that the original posting of the video was on Twitter.
The lady in the video (wife/mother) has subsequently on social media denied knowing the girl, having any housegirl not to talk of maltreating her and has even placed a curse on the person that started the untrue rumor.
She was contacted directly by our correspondent and she confirmed it was really her in the video and that what was posted was false and “fake news”.
The girl alleged to be her housegirl could not be contacted as of the time of this report. However one Mrs Grace Feyikemi who knows the lady personally confirmed that she has no house maid, and the news was fake by a cheap publicity seeker.
It should be noted that the original tweet of the video we understand, has since been taken down – most likely because the poster has realized it was wrong.
From our investigations one can conclude that the news is fake.
If there are any further developments on this story, we will keep you posted.
Screenshots are attached to this report as evidence. 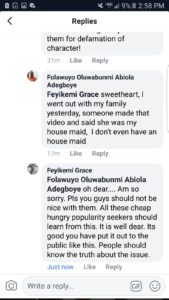 15 thoughts on “We4We Reports EXCLUSIVE: WOMAN IN THE RECENT VIRAL VIDEO SAYS SHE DIDN’T KNOW THE GIRL SEEN IN THE VIDEO AND SPECULATED TO BE HER HOUSE MAID”