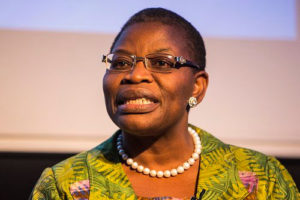 WAS OBY EZEKWESILI A FRAUD? HER PARTY ALLEGES SHE WAS IN IT FOR PERSONAL GAINS

The firebrand erstwhile presidential candidate for the Allied congress party of Nigeria has come under fire feom virtually every angle in the Nigerian social and political circle less than 24 hours after she ended her presidential bid in order to help form a coalition, presumably between Sowore, Durotoye, Kingsley and herself.

It was asserted that she only wanted to be minister of finance. That she only used the Presidential run to get to a certain lvel and then pull out to negotiate for a position as a finance minister.

“The reason for calling this press conference is to let the world know about the presidential aspiration of Dr. Oby Ezekwesili, which in actual fact, is not the truth. I have been put into confidence by one of her aide named Iyinoluwa Aboyeji that she only wanted to use the platform of the ACPN to negotiate to be Nigeria’s finance minister,”

“This she does not deem fit to inform the party whose mandate she is holding. If you observe, Dr. Oby Ezekwesili is the only presidential candidate who was so militant in her campaign without any tangible thing on ground to indicate any seriousness in the prosecution of her campaign.

“No campaign secretariat, billboard or great commitment on ground to indicate any seriousness. It is on this ground that the ACPN is withdrawing support for her presidential aspiration and endorsing the second term bid of President Muhammadu Buhari to take Nigeria to the next level.”

It was also noted that she never consulted the party prior to her withdrawal announcement.

Rhe party now demands the return all donations “from all over the world” since the party would need to account  to the Independent National Electoral Commission (INEC).

“We may take her to court. She was just using us to play,” Galadima said

It was further revealed that she never only paid N100,000 of the required N10 million required for a presidential interest form.

Alhaji Gladima said she was going to get the boot anyway, regardless of her announcement.

“She only preempted the decision we would have reached today which was to withdraw her candidacy and give to somebody else.

“Our presidential nomination ticket is N10 million and expression of interest is N500, 000 but when she came she said she did not have money, that she only had N100, 000 and because we wanted to encourage women, we gave her our platform”, Galadima expressed.

The party further declared its support for the reelection of Buhari

” The ACPN has declared it’s support for the reelection of President Muhammadu Buhari of the All Progressives Congress APC, ”

She’s been accused of pocketing over N169 million Naira rom donations as she an for president and people are demanding their money back.

Some  people took to the social media site, twitter to express themselves.

Ministerial post coming next for Oby Escobar !! We aren’t surprised.. It was clear she came out just 2 attack atiku, get money & get appointment from buhari !! Yahoo girl with cooperate wear & low cut https://t.co/ufvPhe8XRW

Her royal ridiculousness! …i found the whole charade very hilarious!