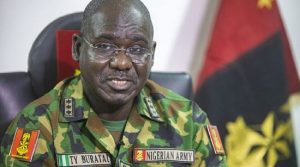 The Chief of Army Staff, Lt.Gen. Tukur Buratai, has declared that he and other service chiefs appointed five years ago have not disappointed President Muhammadu Buhari and the nation in the discharge of their responsibilities.

Buratai made the declaration while welcoming the Chief of Defence Staff, General Gabriel Olonisakin, to the Nigerian Army Super camp four located in Faskari, Katsina State.

Olanisakin was on an operational visit to the camp to assess how troops in the newly formed Exercise Sahel Sanity based in the camp were faring.

Buratai said, “Exactly five years ago, I was in Ndjamena, Chad Republic, when I heard the announcement of General Olanisakin as the Chief of Defence Staff as well as my own appointment as Chief of Army Staff. We are grateful to Almighty God for giving us good health to lead the armed forces.

Buratai said Exercise Sahel Sanity had begun to tackle banditry and other crimes in the North-West just few days after it was launched.

He added that some logistics suppliers for bandits as well as their informants and collaborators had been arrested.

Olanisakin, in his remarks, lauded  Buratai for modernising the Nigerian Army.

He said the Nigerian Army Super Camp Four was one of initiatives to meet modern security challenges.