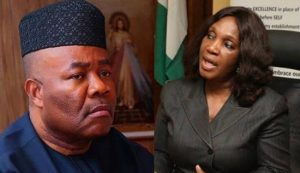 The Minister of Niger Delta Affairs, Senator Godswill Akpabio and the acting Managing Director of the Niger Delta Development Commission, Prof. Daniel Pondei, are expected to appear before the House of Representatives on Monday (today).

The House Committee on NDDC had summoned both Akpabio and the Interim Management Committee of the commission, led by Pondei, to explain the alleged illegal spending and mismanagement of fund under their leadership.

Both the Senate and the House had on May 5, 2020, separately resolved to investigate the alleged spending of over N40bn by the Expanded Interim Management Committee of the NDDC between October 2019 and May 2020 without approval.

It was later discovered that the NDDC had spent N81.5bn within the period.

Pondei had led members of the IMC to stage a walkout on the committee at the investigative hearing on Thursday.

The acting MD had asked that the panel’s Chairman, Olubunmi Tunji-Ojo, should not preside over the probe, a request that was turned down by the lawmakers.

Consequently, the committee had issued a warrant of arrest on the acting MD, asking that the IMC must account to Nigerians.

However, the committee, on Friday, re-invited Pondei and his team to reappear on Monday.

Meanwhile, the Socio-Economic Rights and Accountability Project has called for the immediate suspension of Akpabio, over the NDDC alleged fraud.

SERAP made the call on Sunday in an open letter by its Deputy Director, Kolawole Oludare, to President Muhammadu Buhari.

The group advised Buhari to set up an investigative panel to look into the allegation, rather than leave it in the hands of the National Assembly, where the probe had become messy.

Falana also demanded that the Department of State Services obey three separate court orders for the release of an Aba, Abia State-based lawyer, Mr Emperor Ogbonna, who was arrested in March this year for criticising Governor Okezie Ikpeazu in a Facebook post.

On Wike’s intervention preventing Nunieh’s arrested, Falana noted in his statement on Sunday that the security operatives’ invasion of her house on July 16 was a desperate attempt to prevent her from testifying before a committee of the House of Representatives probing into diversion of huge funds belonging to the NDCC.

He added that since the Rivers State Police Command had dissociated itself from the planned arrest, “the Inspector-General of Police, Mr Mohammed Adamu, should investigate the circumstances surrounding the deployment of the team of police personnel involved in   such reckless abuse of power.”

He also called on Buhari to “dissolve the illegally constituted Interim Management Committee of the NDDC which has since become a cesspool of grand corruption.”