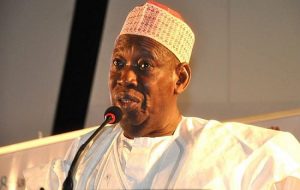 The Chairman, All Progressives Congress National Campaign Council for the Edo State Governorship Election, Abdullahi Ganduje, has accused Governor Godwin Obaseki, of handing the treasury of the state over to the Peoples Democratic Party in his bid to win re-election.

Ganduje, who is also the Governor of Kano State, said this Abuja, shortly after the inauguration of the Edo State APC National Campaign Council at the APC National Secretariat on Monday.

He also said, “We know the PDP made Wike their (campaign council) chairman. I assure you; we will isolate Wike in an isolation centre and before he recovers, the election is over.

“The PDP decided to accommodate our former governor in Edo State, not because they have anything in common, but simply because he is managing the treasury of Edo State and they want him to use that treasury in order to win the election.”

In response, Crusoe Osagie, the Special Adviser on Media to Obaseki, said on the telephone, “It is most disrespectful to hear such from Governor Abdullahi Ganduje, who has so much baggage on financial matters.

“He still has a lot of explanation to make to Nigerians when he was caught on tape stuffing dollar bills he collected from a contractor into his flowing gown.

“The people of Edo State know their Governor, Godwin Obaseki, as a man who has been prudent with their resources.”

Earlier, during the inauguration of the campaign council, the Chairman of the APC Caretaker/ Extra-Ordinary National Convention Planning Committee, Mai Mala Buni, said, “The assignment before the reconciliation and campaign committees is to ensure a peaceful and united APC and successful renewal of mandate by the good people of Edo state who voted for the party in 2016.”