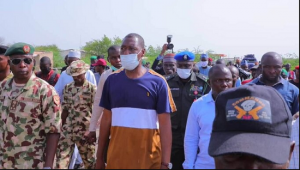 Defence Headquarters has declared that the attack on the convoy of Borno State Governor Babagana Zulum last week, was not an act of sabotage by soldiers as alleged by the state helmsman.

The Coordinator, Defence Media Operations, Maj. Gen. John Enenche, said an analysis of the footage of the attack indicates that the attack was carried out by Boko Haram insurgents, noting that the action was consistent with enemy habits and the type of weapon used.

Zulum was on his way to Baga penultimate Wednesday when suspected insurgents attacked his convoy forcing his security aides to whisk him to safety in a police armoured truck.

The governor had just left the Army Super Camp in Baga, to visit other parts of the town, when his entourage came under attack forcing him to abort the trip.

A livid Zulum confronted the unit commander and accused the army of sabotage. He later told reporters in Munguno that there were no insurgents in Baga, hinting that the attack was set up by the security forces.

But speaking on a Channels Television programme on Wednesday evening,
Enenche said the military was worried by the allegations of sabotage made by the governor, adding that it subjected the footage of the attack to analysis.

He said, “It is an allegation which needed to be probed and also, I must say for such an allegation, it calls for worry on our part as the high command of which we went into action immediately.

“We investigated it immediately and the strategic level is cleared of that; operational level cleared of that, tactical level, cleared of that. We analysed the video: you will discover from the sound of the gunshots, it is not the professional weapons that we use.

“And of course, if you have operated with an enemy for some time, we call it enemy habit. From the analysis, it was purely that of the enemies, Boko Haram, in that area. From the tactics, and from the search conducted, it was the insurgents.

“So, our fears were allayed within 48 hours. It is not anything sabotage from the tactical, operational and strategic level, that is if you want to rate it from rank down to the person on the frontline.”

The Coordinator said the military did not have the challenge of inadequate funding or lack of weapon, adding that the security forces were fighting “a new type of war, a new security challenge.”

On the reported mass retirement in the military, Enenche described it as mischievous, noting that as men were retiring, new intakes were coming in, stressing that retirements in the military were not unusual.