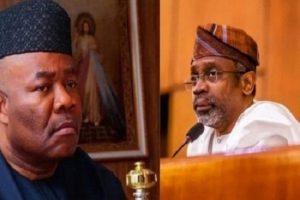 Barring a last-minute change of plan, both the Senate and the House of Representatives will pass its verdict on the alleged illegal spending and mismanagement by the Interim Management Commission of the Niger Delta Development Commission on Thursday (today).

One of our correspondents confirmed on Wednesday that the House Committee on NDDC, which is investigating the commission and the Ministry of Niger Delta Affairs, has scheduled submission of its report for Thursday.

The National Assembly is billed to embark on two-month annual recess on Thursday. The committee had on Monday adjourned its investigative hearing sine die (indefinitely).

The adjournment was after the acting Managing Director of NDDC, Prof. Daniel Pondei, collapsed while being grilled by the panel, and the Minister of Niger Delta Affairs, Senator Godswill Akpabio, had a dramatic engagement with the lawmakers, during which he accused members of the National Assembly of getting 60 per cent of contracts from the commission.

The House, at the plenary on Tuesday, had denied the allegation while the Speaker, Femi Gbajabiamila, asked Akpabio to provide details of the contracts before 48 hours or face “the full wrath of the law.”

The ultimatum expires on Thursday (today), when the House would hold its last sitting for the legislative year.

A prominent member of the committee, who spoke on the condition of anonymity, disclosed that the panel planned to submit its report before adjournment.

Confirming the planned submission, Chairman of the House Committee on Media and Public Affairs, Mr Benjamin Kalu, said the report by the committee was already being prepared as of the time our correspondent called him on Wednesday.

At the Senate, a member of the ad hoc committee probing the NDDC also disclosed that the report by the panel was ready for presentation at the plenary on Thursday.

Meanwhile, the House on Wednesday demanded documentary evidence of withdrawals from the Excess Crude Account between 2005 and 2007 by the President Olusegun Obasanjo-led administration, totalling over $11bn.

The Chairman, House Ad Hoc Committee on Power Sector Review, Alhassan Ado-Doguwa, issued the directive after the presentation of the Accountant General of the Federation, Mr Ahmed Idris, who said a total sum of $8.234bn was spent from the ECA between 2005 and 2007, as approved by Federal Executive Council comprising the state governors.