Spanish striker, Diego Costa has been given an eight-game ban for his controversial rant at referee Jesus Gil Manzano during Atletico Madrid‘s 2-0 defeat by Barcelona last Saturday.

The 30-year-old was shown a straight red card in the 28th minutes after he repeatedly said to the referee “Me cago en tu puta madre,” which literally translates to “I shit on your whore mother.”

The referee’s report also accuses Costa of holding the referee’s arm so as to prevent him taking out more cards for his team-mates. 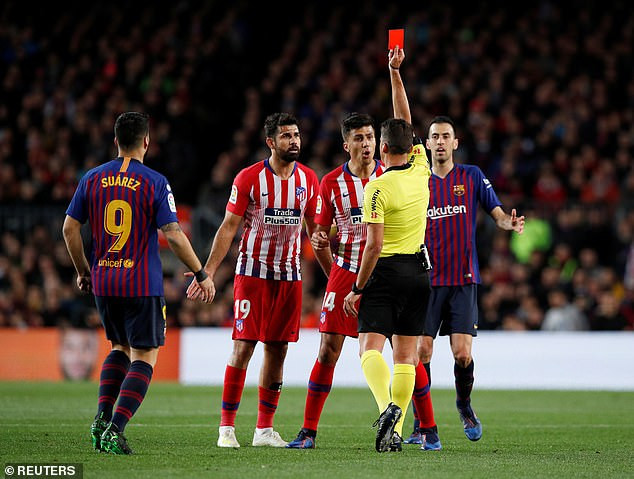 Gil’s report read: ‘Once sent-off, still on the pitch, he grabbed my arm to prevent me from showing yellow cards to his team-mates No 24 [Jose Gimenez] and No 2 [Diego Godin].’

The Spanish Football Federation (RFEF) ban consists of four games for being found in breach of Article 94 of the league’s code of conduct for using insulting or offensive words towards a match official, and four matches for breaching Article 96, which refers to the use of light violence towards referees.

Atletico were fined £2,400 while the former Chelsea striker was fined £5,200 over the incident. They have 10 days in which they can lodge an appeal.