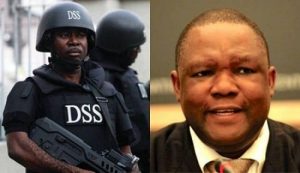 The Department of the State Services has again invited a former Deputy Governor of the Central Bank of Nigeria, Dr Obadiah Mailafia, to appear at its Jos office.

Mailafia, in a telephone interview with our correspondent in Jos on Monday, disclosed the development.

He said, “I have been invited again to appear at the DSS office in Jos on Monday (today) by noon.

“I received the invitation on Saturday. I don’t know why they are inviting me again because during my last visit, nobody told me that I would come again.

“There seems to be more interest in what I have to say than the killings in Southern Kaduna. But all I am saying is that the killing of my people in the state and in other parts of Nigeria must stop.”

The former presidential candidate of the Action Democratic Congress, however, said he would honour the DSS invitation.

The DSS had last week invited Mailafia to its Jos office following an interview he granted to a radio station, Nigeria Info, during which he accused a northern governor of being one of the commanders of Boko Haram in Nigeria.

The ex-CBN boss later told journalists after his release six hours later that he stood by his statement, a development which the DSS condemned.