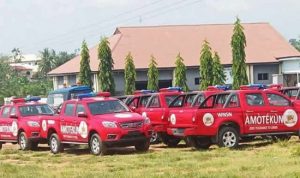 Another set of 17 illegal miners, mostly youths from the north, heading to Itagunmodi, Osun State, were on Sunday intercepted in Ikire.

Recalled that on Thursday, June 4, 63 illegal miners, mostly youths from Zamfara State, heading to mining sites in Ilesha and Ile Ife were intercepted by Amotekun corps in Ikire, and forced out of the state.

The new set of youths, were intercepted by Amotekun men at their checkpoint in Ikire after the bus conveying them was stopped by the Amotekun corps.

The 17 northern youths upon interrogation, claimed they were coming from Lagos and were heading towards mining sites in Itagunmodi.

When being checked, charms were said to have been discovered on two of the youths.

The Director General of Amotekun Corps in the state, Mr Amitolu Shittu, said, “The 17 suspects, who claimed they are coming from Lagos and going to Itagunmodi mining site, could not explain while they decided to break the directives by the president against interstate travel.

“Since the boundary closure is still in force, adhoc men of Amotekun Corps in the state had no option than to send them back to where they were coming from.”