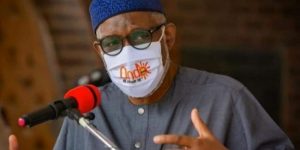 The Ondo State Governor, Mr Rotimi Akeredolu, has emerged the candidate of the All Progressives Congress for the October 10 governorship election in the state.

In the result declared around 12.25am, Akeredolu won in all the local government areas of the state, defeating other seven contestants.

The primary of the APC was conducted with over 2,500 delegates from the 18 local government areas of the state who converged on the International Event Centre, Alagbaka, Akure, the state capital, to cast their votes.

Scores of armed security men from the police, the Department of State Services, the National Security and Civil Defence Corps and men of the Federal Road Safety Corps, were deployed in the venue of the exercise.

No fewer than eight aspirants finally contested for the ticket of the party after three aspirants stepped down for Governor Rotimi Akeredolu.

As of Monday morning, the party had 11 aspirants jostling for the ticket.

However, before the commencement of the exercise, the trio of Abraham, Odimayo and Adojutelegan withdrew from the race and declared their support for Akeredolu.

Recall that an aspirant, Ife Oyedele, had earlier stepped down for Akeredolu.

It was gathered that the aspirants who stepped down for Akeredolu on Monday did so following the pressure and instructions from the party national leadership.

A source in the APC said, “There was a serious meeting with the reconciliation committee led by Governor Sani Bello of Niger State with some of the aspirants over the weekend; this is the result of the meeting.”

Stating his own reason, Abraham, who is a member of the Unity Forum, said, “In line with the party decision and respect of party supremacy, I hereby announce my stepping down from the APC 2020 gubernatorial primary election of our dear state.

This decision was made in support of the candidacy of Governor Rotimi Akeredolu, after much consultation across and within party lines.”

Similarly, another aspirant, Odimayo, also mentioned the party’s influence on his decision to withdraw from the race.

“After a series of meetings and consultations with the top hierarchy of our party at both the national and state levels, fellow contestants, leaders, elders and other stakeholders, I  will not be participating in today’s July 20, 2020 APC Governorship Primary Election, thereby pledging my full support and that of my team and political family members for our Governor Akeredolu to emerge, as the candidate of our party, APC,” he said.

Earlier, the Chairman of the APC Primary Committee and Governor of Kogi State, Mr Yahaya Bello, said the exercise would be free, fair and transparent.

He said, “ I was satisfied with what I saw when I came in. I saw that the security arrangement was proper. I also commended the delegates for comporting themselves in a good manner and I am very sure that the exercise would be free and fair.”

Also, Akeredolu had expressed hope of coming out victorious at the primary.

On the controversy surrounding the delegates’ list, Akeredolu said, “I never wanted to be involved in all the complaints because I know that a farmer goes to farm with implements. The farmer only complains when he is not ready.”

Another aspirant, Oke, commended the Chairman of the Primary Committee, Governor Yahaya Bello, for looking into some observations made.

“We cannot tolerate a situation where the APC will slide into the opposition in Ondo State.

“There will be fight and quarrel when people try to cut corners. My confidence will be determined by the process. We pray what happened in 2016 will not happen again. In election matters, the more you look, the less you see,” Oke said.