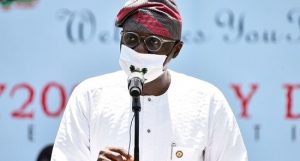 The Governor of Lagos State, Mr Babajide Sanwo-Olu, has suspended the reopening of religious houses indefinitely, saying the spike in COVID-19 cases in the state makes the decision inevitable.

Sanwo-Olu said Lagos had got to the point where every resident must take responsibility for their safety, adding that only “sensible personal decisions” taken on a daily basis would defeat the virus.

He stated these on Tuesday at the Lagos House, Marina, where he gave his 15th update on the COVID-19 pandemic.

According to him, Lagos accounts for 44 per cent of the total number of confirmed cases nationwide, adding that the increase in infection was caused by the community transmission of the virus.

He noted that the earlier announcement that mosques could reopen from June 19 and churches, June 21 had been put on hold.

“This is not a decision that we have taken lightly; it is simply in line with our ongoing evaluation of evolving scenarios regarding the course of the infection in Lagos State and the corresponding public health advisory guidelines issued by experts.

“So, let me say this again: we are now hereby suspending, with immediate effect, the plan to reopen religious houses and places of worship in Lagos State, until further notice,” Sanwo-Olu added.

The governor said social and event centres and clubs would also remain shut.

He urged residents to use face masks anytime they were out of their houses, stressing that they must avoid non-essential travel, wash and sanitise their hands regularly.

“As a government, we will continue to do everything in our power to safeguard the health and wellbeing of the people, but that can only be effective when the people themselves act responsibly and do not behave in a manner that undermines public health guidelines and puts the society at risk,” he said.