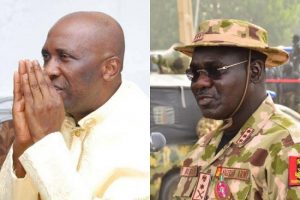 Primate Ayodele said he was not sure Buratai would survive the assassination attempt.

In a statement he sent to WE4WE REPORTS, the clergyman also warned of possible mutiny within the ranks of the military.

He called for caution, stressing that military officers may start killing themselves.

He said: “If care is not taken, the military will start killing themselves.

“The Chief of Army Staff will face an assassination attempt. I don’t know if he will survive it.

“Let’s pray against any plane crash, Air Force or police helicopter or any private jet crash.”