President Muhammadu Buhari has ratified the appointment of former Minister of Commerce, Bello Maitama-Yusuf, as member of the Board of Directors of the Nigerian Railway Corporation, NRC.

Special Assistant on New Media to the Governor of Jigawa State, Auwal Sankara, confirmed the appointment and revealed that Maitama-Yusuf was nominated by Muhammad Badaru Abubakar, Governor of the state.

He wrote on Facebook, “In recognition of his hard work, resilience and steadfastness in the progress of APC and development of Jigawa State and Nigeria at large, the Governor of Jigawa State Alhaji Muhammad Badaru Abubakar has facilitated the appointment of Senator Bello Maitama Yusuf as a Member of the Board of Directors of the Nigerian Railway Corporation (NRC).”

Maitama-Yusuf’s appointment letter read: “Pursuant to section 5 of the Nigerian Railway Corporation Act cap. N129, LFN2004, and all powers enabling the Honourable Minister of Transportation in that behalf, and consequent upon your nomination by the governor of Jigawa State, I am pleased to inform you of your appointment by the Honourable Minister, as a member of the Directors of Nigerian Railway Corporation. 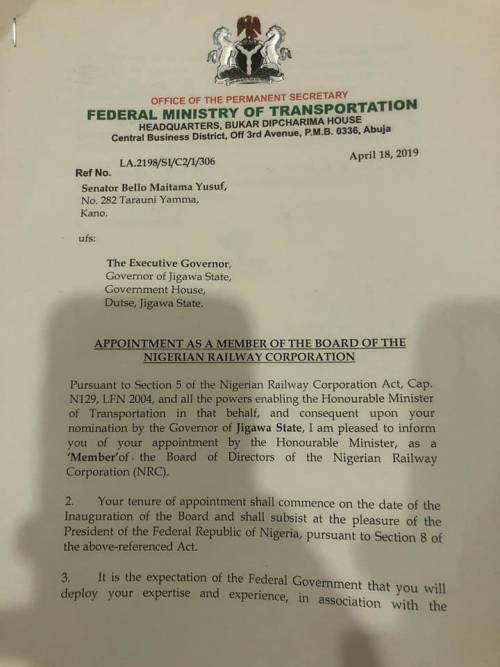 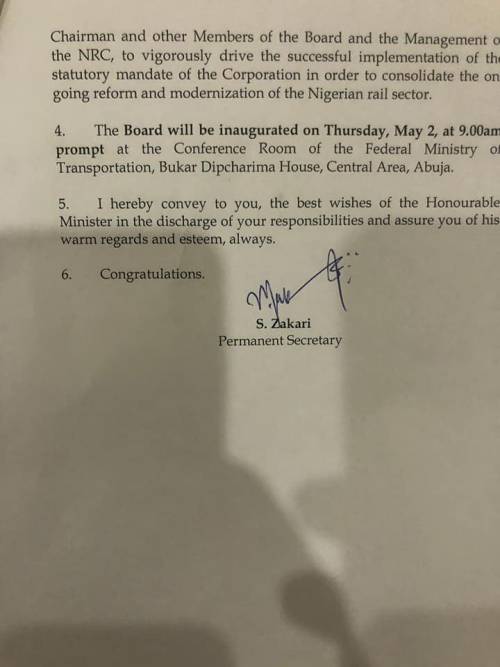 “Your tenure of appointment shall commence on the date of inauguration of the board and shall subsist at the pleasure of the President of the Federal republic of Nigeria, pursuant to Section 8 of the above-referenced Act.”

He served as senator representing Jigawa South-West at the National Assembly between 1999 and 2007, initially on the platform of the All Nigeria People’s Party, ANPP.

He later defected to the Peoples Democratic Party, PDP.

He also contested for the governorship of Jigawa State in 2007.

President Buhari had in 1983 accused Maitama-Yusuf of corruption during his military regime between 1983 to 1985.

The former Minister, however, went into exile to avoid prosecution.