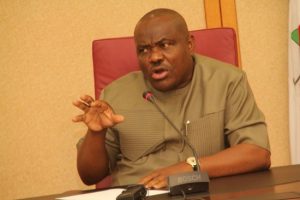 The All Progressives Congress has asked the Rivers State Governor, Nyesom Wike, not to rewrite history by refusing to accept the role his party – the Peoples Democratic Party – played in “killing” the Nigeria Governors Forum when the Goodluck Jonathan government introduced the “16 is greater than 19” political formula.

The Deputy National Publicity Secretary of the APC, Yekini Nabena, said this in an interview with journalists, in Abuja, on Tuesday.

The APC Spokesperson was responding to allegations by the Rivers State Governor, Nyesom Wike, that the NGF lost its bite when the APC assumed power at the centre in 2015.

Nabena said the governor was still living in the past when impunity was the order of the day.

The APC spokesperson said, “Does Governor Nyesom Wike think Nigerians can forget in a hurry the major role he as a PDP minister played when the then Rivers State Governor, Rotimi Amaechi, scored 19 votes while a former Plateau State Governor, Jonah Jang,  who scored 16 votes was recognised as the chairman of the Nigeria Governors’ Forum?

“Wike also needs to be reminded on the major role he played as a foot soldier who engineered the barring of the then Bayelsa State Governor, Timipre Sylva, from participating in the PDP governorship primary election scheduled in 2011.”