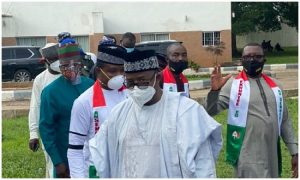 As the Peoples Democratic Party’s governorship primary kicks off in Edo State today, some top members of the party have started arriving in the state to observe the process.

Among those on ground is the Governor of Bauchi State, Bala Mohammed, who came into the state on Wednesday night.

Mohammed, who is the Chairman, PDP Electoral Committee for the Edo governorship primary, said, “We are going to deploy our experience in terms of exhibition and manifestation of internal party democracy to conduct a credible and acceptable primary election by doing justice to all involved and ensuring transparency in the process.”

The primary election, which was earlier slated for June 19 and 20, had been moved to June 23  and later rescheduled for June 25.

A total of 2,229 delegates are expected to decide who emerges as the candidate of the state governorship election scheduled for September 19.

PDP National Publicity Secretary, Kola Ologbondiyan, said the party followed due process in electing eligible delegates to vote the most suitable candidate among the array of eligible aspirants.

Four persons initially obtained the expression of interest and nomination forms and were screened and cleared to contest.

Apart from Governor Godwin Obaseki, the other aspirants are Gideon Ikhine, Ogbeide-Ihama and Kenneth Imasuagbon. Two of the aspirants are reported to have stepped down for Obaseki.

WE4WE REPORTS had earlier reported that Obaseki recently dumped the All Progressives Congress following his disqualification from its primary election, and joined the PDP.

The winner of today’s primary will face the All Progressives Congress candidate, Pastor Osagie Ize-Iyamu, who is one of the major contenders in the September 19 governorship election.