Justin McGriff was on a Hillsborough Area Regional Transit bus on Saturday afternoon when he began arguing with the driver. As Thomas Dunn, 46, drove the public bus down Nebraska Avenue during their argument, McGriff walked up to him brought out a sharp weapon and slashed Dunn’s throat after telling him, “God bless you,” twice.

The cut severed Dunn’s carotid and jugular arteries. Dunn was able to bravely pull the bus over to the side of the road to save his passengers from an accident. He later died on the bus.

Terrified passengers who witnessed the incident called police at 4:15 p.m to report Saturday’s killing. A recording of the call shows the chaos that erupted following the stabbing.

“This guy just stabbed the bus driver in the neck,” the caller says over the sound of other passengers shouting in the background.

The operator asks if the assailant is still on the bus.

The caller replied: “He ran off. We was on the bus at it was driving so he jumped off as it was still moving. The guy slit his neck, sir. The guy is actually dead right now, the driver.”

Police apprehended McGriff a few hours later. He has been charged with first-degree murder. 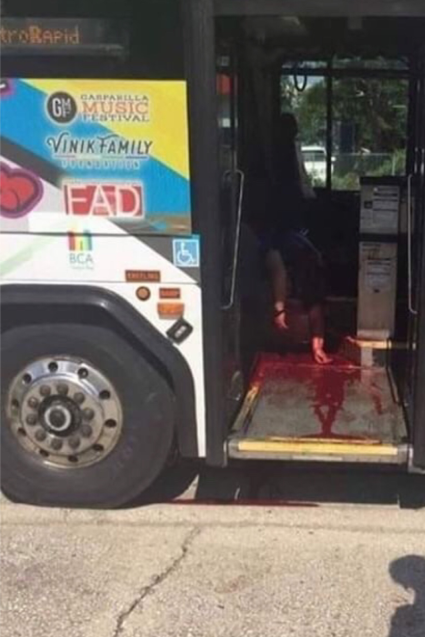