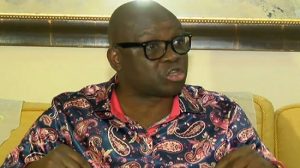 Fayose, who made this know on Friday via his verified Twitter handle, urged the President not to continue treating looting of public treasury as a family affair.

He wrote, “With this level of fraud exposed in NDDC, Buhari must sack Akpabio now. The President can’t continue to treat the looting of public treasury as a family affair and his fight against corruption as an instrument of persecution against opposition figures.

“By keeping in his government the likes of Akpabio and the NDDC MD, Prof Pondei, who went about celebrating the success of their National Assembly drama with hot pepper soup and assorted drinks, the President will only be reinforcing the conclusion that he supports corruption.”

There have also been calls by the National Assembly for the dissolution of the Interim Management Committee and the return of the NDDC to the Presidency for direct supervision.

For instance, the Senate ad hoc committee set up to unravel the alleged financial recklessness of the IMC to the tune of tens of billions of naira on Thursday lamented the extra-budgetary spending of the IMC, urging the President to immediately dissolve the committee.

The House of Representatives is also currently probing alleged corruption in the NDDC.

But the President is yet to take any decision concerning the dissolution of the IMC and the termination of the appointments of the minister and the acting NDDC boss.

The President’s Special Adviser on Media and Publicity, Femi Adesina, in a statement on Friday titled, ‘Fake News On NDDC Attributed To Me’, said, “A statement purportedly signed by me has been making the rounds that the Federal Government has dissolved the Interim Management Committee of the NDDC.

“Merchants of fake news in action. The communication did not emanate from the media office of the President. Please ignore.”

The President had in October 2019 set up a three-man committee “to create the enabling environment for the forensic audit” that covers 18 years of NDDC’s operations between 2001- 2019.

The NDDC IMC was later enlarged to five in February 2020 by the President following the termination of the appointment of the then acting Managing Director, Joy Nunieh, who was replaced with Pondei.