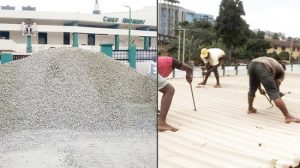 Seventeen members of the Edo State House of Assembly loyal to   the immediate past National Chairman of the All Progressives Congress, Adams Oshiomhole, on Thursday impeached the Speaker,  Frank Okiye, and elected Mr Victor Edoror, as his successor.

As early as 7am, there was tension at  the  Assembly complex in Benin City following the heavy presence of security agents.

The crisis came to a head in the afternoon when the roofs of the Assembly were removed by youths, who used heaps of  granites  to block the gate.

In the morning,  hordes of security agents were   at the Assembly  following an alleged plot   to deploy special forces from the headquarters of the Nigeria Police Force in Abuja to take over the legislature.

It was learnt that a team of Special Anti-Robbery Squad allegedly deployed from Abuja had in the early hours of Thursday attempted to dislodge the regular policemen guarding the Assembly Complex.

Some policemen with ‘DRAGON’ tags were seen within the Assembly complex.

This  came less than 24 hours after the Deputy Speaker of the House, Mr Yekini Idiaye, was impeached by seven lawmakers loyal to  Obaseki.

The 24-member Assembly, all APC members, had been operating with only 10 members that were inaugurated into the 8th Assembly after the proclamation by the governor in June 2019.

The other 14 members are still designated as members-elect because they have yet to be inaugurated.

The impeached Deputy Speaker had on Sunday, alongside two others who were among the initial 10, openly declared support for the APC governorship candidate, Osagie Ize-Iyamu.

The Speaker of the House, Mr Frank Okiye, had after the impeachment of the Deputy Speaker on Wednesday, raised the alarm that the Governor of Imo State, Chief Hope Uzodinma, and stakeholders of the APC in Edo State, had concluded plans to import a fake mace to take over the Assembly.

Following the tension at the Assembly on Thursday, hundreds of pro-Obaseki supporters, who are members of the Peoples Democratic Party, stormed the House.

The governor, who was said to have cut short an ongoing campaign of the PDP in Edo North to Benin City, told his supporters at the Assembly that there was no cause for alarm.

He was accompanied to the Assembly complex by the state Deputy Governor, Mr Philip Shaibu.

Okiye who was later impeached by pro-Oshiomhole lawmakers, pledged to defend the Assembly.

Shortly after the governor and the Speaker left,  artisans ostensibly acting on government orders, resumed work in the ongoing renovation.

Trucks deposited heaps of granites at the general and exclusive gates of the complex.

Also, some youths with different tools were led into the House, as four of them climbed ladders to the top of the complex.

The men could be seen struggling to break the mace statue, which they eventually snapped into two.

Another group of youths later proceeded to remove the roof.

Although the Speaker had earlier hinted that the complex was being renovated, the barricade and removal of the roof, it was learnt, were to stop the APC lawmakers who had pledged loyalty to Ize-Iyamu, from taking over the complex.

The security presence at the complex was still rife as of 5 pm while the removal of the roof continued.

The APC Media Campaign Council for the Edo Governorship Election has, however, rubbished claims that its leadership “ferried police from Abuja” to block the Assembly complex.

In a statement  by the Chairman of the state Media Campaign Council, Mr John Mayaki, the party accused the state government of carrying out several onslaughts against the constitutional independence of the legislative arm of government by attacking its members-elect and denying them representation.

He insisted that the governor was responsible for numerous other sieges to the Assembly complex and was in the best position to tell the world who was behind the invasion.

“It is a known fact that Governor Obaseki has treated the House of Assembly, an independent and co-equal branch of government, as a mere extension of his office through the brutalisation of members-elect and the denial of representation to the majority of members.

“In a Gestapo style, the outgoing governor hijacked a tiny minority and purportedly inaugurated them in the dead of the night. The sham inauguration was condemned and set aside by both arms of the National Assembly after their separate investigations revealed that the members, and indeed the Clerk, were forced to participate in the illegality under threat to life.

“With these criminal antecedents, we believe if there is any unwholesome activity ongoing at the Assembly complex, it is Mr Godwin Obaseki who is in the best position to explain to the world what is going on and why. Comrade Adams Oshiomhole, or the APC, does not control the Police,” he said.

The National Publicity Secretary of the PDP, Kola Ologbondiyan, on Thursday charged the Inspector-General of Police, Adamu Mohammed, to stop the attempt to take over the Edo State House of Assembly by security operatives “illegally deployed from Abuja by the All Progressives Congress.”

Ologbondiyan, in a statement titled, ‘.Stop invasion of Edo Assembly now’ said, “The party posits that the invasion and illegal occupation of the state legislature by security agents allegedly deployed by sacked national chairman of the APC, Adams Oshiomhole, is a direct coup against the democratic order of Edo State and a recipe for anarchy, chaos and bloodletting.

“We urge the Inspector-General to act with dispatch to curb this nefarious situation, which has heightened tension in the state, and if not halted, may result in a bloody clash as the citizens are already charged to defend their symbol of democracy from a forceful takeover.

“The police hierarchy is urged to note that this provocative and lawless act by the APC is part of its plans to overheat the polity and create a security situation with the view to unleash violence on the people, derail the democratic order in the state and blame it on security agencies.“

Ologbondiyan also condemned what he referred to as “this notorious resort to self help by the APC and their agents to forcefully take over power in Edo State through the back door.”

The party restated its call to  President Muhammadu Buhari to rein in Adams Oshiomhole before he triggered a serious crisis in the state.

Also, the Edo State Publicity Secretary of the PDP, Mr Chris Nehikhare, in a statement titled, ‘Failed Assembly Takeover,’ said the plot to take over the Assembly was thwarted by the Edo people.

A former Vice President, Atiku Abubakar, described the current political situation in Edo State as a threat to Nigeria’s constitutional order and the rule of law, urging “belligerent forces to rein in their proxies.”

He stated this in a series of tweets on his verified Twitter handle @atiku on Thursday.

“As I have previously said, without the rule of law, there will be no rule at all. The current goings-on portend grave danger, not only to law and order in that state, but to the coming Edo elections.”

Obaseki is the problem of Edo State – APC chairman

The Edo State Chairman of the All Progressives Congress, Col. David Imuse (retd.) has described the state Governor, Godwin Obaseki as the main problem confronting the state.

He said this in a telephone interview with our correspondent, on Thursday.

He said the APC in the state condemns the destruction of public property under the guise of the renovation of the state assembly by thugs loyal to the governor .

Imuse said, “The problem of Edo State today is not APC or PDP, it is Godwin Obaseki.

“This is a man who thinks he can depend on illegality to have his way. For close to two years the judiciary and the legislature which represent two of three arms of government were rendered ineffective because of one man.

Today, the majority of members of the Edo House of Assembly decided to organize themselves to do the right thing is that a crime? We are dealing with a monster called Obaseki.”

On his part, the Publicity Secretary of the APC in Edo State, Mr Chris Azebamwan, in telephone chat with one of our correspondents,said Obaseki displayed executive  rascality by going to the Assembly.

He said, “Every right-thinking Nigerian should condemn in the strongest term the executive rascality and impunity that was displayed today by Governor Obaseki. There are three separate arms of government, viz- executive, legislature, and judiciary and they work cooperatively for the growth of the society but at the end of it, they are separate.

“I do not know what Governor Obaseki can offer to say he now became a guard at the gate of the House of Assembly. It is not the business of the Executive to choose the leadership of the Assembly and that is what all this whole thing was about. However, we are quick to assure Nigerians that all we have done today was to stand in defence of democracy.

The factional Speaker, Edoror, who represents Esan Central Constituency, was elected in an emergency plenary session attended by 17 elected members.

It was learnt on Thursday that the meeting, which took place in an undisclosed location in Benin City in the early hours of the day, also saw the election of Emmanuel Agbaje of Akoko Edo Constituency II, as the Deputy Speaker of the Assembly.

WE4WE REPORTS learnt from a source that the 14 lawmakers-elect that had yet to be inaugurated were immediately inaugurated, after which they reportedly impeached Frank Okiye and Roland Asoro as Speaker and Deputy Speaker, respectively.

The source told one of our correspondents that the new Speaker, Edoror, promised to focus on legislative duties and not pursue the impeachment of any member of the executive.

Edoror also directed the Edo Commissioner of Police, the Inspector-General of Police, and other security agencies to eject the thugs who had invaded the Assembly complex to allow for a rancour-free plenary on Friday, August 7.

A picture from one of the sources close to the parallel Speaker showed that Edoror visited the police commissioner in company with his deputy, Agbaje.

But reacting to the impeachment, Okiye said his removal by the lawmakers was a non-issue and he would not react to it.

Meanwhile, the candidate of the APC in the September 19 governorship election, Osagie Ize-Iyamu, has congratulated the newly-elected Speaker of the Edo Assembly, Mr Victor Edoror.

Ize-Iyamu described Edoror’s emergence as the end of a deformed and lopsided democracy.

In a congratulatory message by the Chairman of the APC State Media Campaign Council, Mr John Mayaki, Ize-IyamU said the election of Edoror was a victory for Edo State and all constituencies previously denied representation.