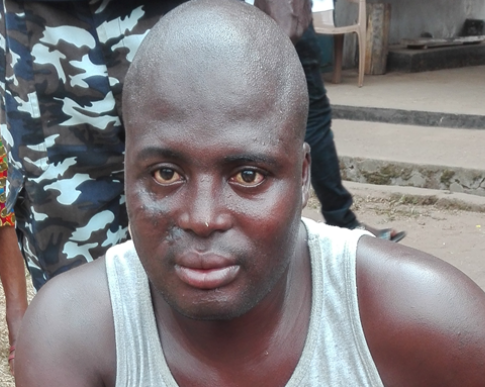 35-year-old Uwaila Idehen who shot and killed his wife and two sons in Ovbioge community in Ovia North local government area of Edo State yesterday over allegations of infidelity, says he does not know what came over him before he killed his family.

Idehen had gotten into a heated argument with his wife after she called him out for having numerous girlfriends. The wife had threatened to also engage in extramarital affair if he does not stop. Idehen reportedly stormed out of the house after she made the threat and returned some minutes later with a double-barrel rifle he got from a retired police officer, which he used to kill his wife and their two sons. Read here.

While being paraded today by the state police command, Idehen who confessed to killing the victims, added that he did not know what came over him when he carried out the act.

“I am a tipper driver. We are two children in my family, my elder sister and me. I am 35 years old. My wife had three children for me, a girl and two boys. The girl is six years, and the boys were three and two years old respectively. I don’t know what came over me, and I was not drunk. Due to the nature of my job, my wife always accused me of having affairs with other women, but it is not true.

“At times, when she sees me with my female customers, she will start an argument with me, but I always assure her that there was nothing like that and that my concern was how to take care of the three kids we had together.

“I always walk away whenever she got me provoked but that Sunday, I don’t know what came over me. Instead of just leaving the house, I picked up my gun and shot through the door and the bullet pierced through the plywood door and hit my wife and the two boys. The girl narrowly escaped.”