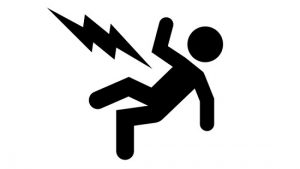 A middle-aged man has been electrocuted in the Boji Boji area of Agbor, Ika South Local Government Area of Delta State.

It was gathered that the yet-to-be identified man was electrocuted by high tension wire on Sunday, while riding a motorcycle on the old Lagos-Asaba Road.

A community source, who spoke to our correspondent on condition of anonymity, said the young man, believed to be a businessman, met his untimely death while riding his motorcycle on the road, close to the Mary Mount College.

He said that the high tension wire suddenly snapped and struck the victim in the back and he fell on the paved road.

The source stated, “Immediately the incident occurred, people ran to the scene and it took the efforts of some individuals, who put calls across to the BEDC office before power was cut off to prevent more casualties.

“Sympathisers rushed the man to a nearby hospital, but unfortunately, he could not make it because he was seriously injured by the high tension wire.”

He described the incident as unfortunate and called on the Benin Electricity Distribution Company to engage the services of professionals and also use quality materials to avoid such incidents.