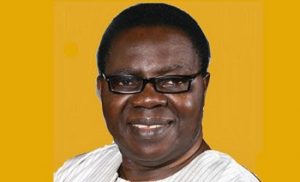 Juju music legend, Ebenezer Obey, was at the receiving end of a death rumour last week. Though he has since come out to debunk the rumours, he has continued to receive goodwill messages from all over the world.

In an interview with WE4WE REPORTS, the singer said the death rumours taught him an important lesson. He said, “To be sincere with you, I was shocked at the overwhelming love that people showed me. Till now, I have continued to receive phone calls from all over the world.

I knew I had fans but I didn’t know the love they had for me was that much. I am very grateful to my fans for the love they have shown me and I pray God will continue to bless them. One important lesson I learnt in the midst of all this is that people love me. It is clear that if one does good, one would be loved and appreciated by people.”

While narrating the experience of learning about his own obituary, the elderly musician told WE4WE REPORTS the biggest shock of his life. He said, “I was in my room with my son, Lanre, when a call came in for him. I just heard him say ‘It is a lie. My dad is here with me or will you speak with him?’ He told me that the caller said it was on social media that I had passed on in London. Can you imagine that? I came back from London almost three months ago and someone is claiming that I had died in London.

All of a sudden, all my children began to call in to recheck what they learnt on social media. Different calls from everywhere from people and it was really overwhelming. Some would say ‘Commander, is that you? Are you okay because since I read the news, my blood pressure has gone up’. Some after hearing my voice burst into tears. How can anyone write anything and put on the Internet to put people in distress?”

On what could have triggered the rumours, Obey insisted that he had no clue. “You can see that I’m hale and hearty. There is nothing wrong with me and I haven’t been to any hospital recently. If I had been at a hospital, one could say someone saw me there and decided to spread rumours.

But that is not the case. The only thing wrong with me is that I have challenge with my eyesight. I have had surgery for glaucoma and cataract and that is not something strange. And because of that, I watch my steps because I don’t want to fall down. Even when I came out to tell people about this, some people still believe I am blind but I am not.”