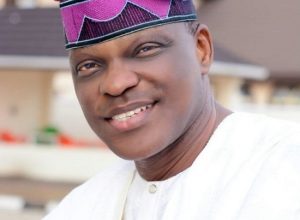 A former Attorney-General and Commissioner for Justice in Ondo State, Mr Eyitayo Jegede, has been elected the candidate of the Peoples Democratic Party for the October 10 governorship election in the state.

The election was keenly contested among the eight aspirants, and no fewer than 2,122, delegates from the 18 local government areas of the state participated in the election.

The accreditation of the delegates commenced around 10am while the delegates started to cast their votes around 2pm  at the main, auditorium of the International Event Centre, Akure, the Ondo State capital

The exercise was conducted in line with COVID-19 protocols as any delegate or stakeholder without tag or face mask on was not allowed into the arena.

There was heavy presence of armed security men from the state police command, Nigeria Security and Civil Defence Corps, Department of State Services and the Federal Road Safety Corps at the venue.

The officials of the Independent National Electoral Commission were also present to monitor the process.

Earlier, supporters of some of the aspirants sang songs outside the venue to show support for their favourite aspirants.

However, few hours before the commencement of the primary, two members of the party were mobbed outside the venue of the exercise for allegedly being in possession of some thumb-printed ballot papers.

The chairman of the Peoples Democratic Party Primary and Governor of Enugu State, Mr Ifeanyi Ugwuanyi, while speaking with journalists promised to conduct free, free and credible exercise.

Ugwuanyi, who entered into the venue of the primary around 1.40pm expressed satisfaction with the process

He said, “We are building a nation and I promise to conduct a free and fair primary.  I want to assure you that a credible candidate will emerge through this process.

However, after the voting ended at 7.30pm, the process was halted for almost two hours following an argument among the aspirants and the members of the primary election committee over certain list of delegates.

But the matter was resolved and 11 former members of the state House of Assembly were allowed to cast their votes.