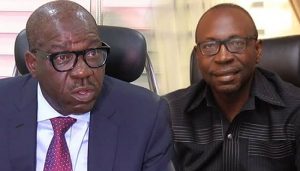 The governorship candidate of the All Progressives Congress for the September 19 election in Edo State, Osagie Ize-Iyamu, has raised the alarm over alleged plans by Governor Godwin Obaseki to obtain N20bn loan from financial institutions to fund his campaign.

In a statement on Friday by the Director of Communication and Media of his campaign organisation, Mr John Mayaki, the APC governorship candidate criticised the governor for plunging the state into debt for desperate and personally-beneficial political activities.

He warned financial institutions against granting “fraudulent loans” to the state government.

Ize-Iyamu, in the statement, said, “After draining the state treasury with his corrupt N15bn pay out to the Peoples Democratic Party tax-collectors for the party’s ticket, it has come to our notice that Governor Obaseki is now scurrying around to embark on another borrowing spree with a planned N20bn bond loan from some financial institutions.

But the Special Adviser to the Governor on Media and Communication Strategy, Mr Crusoe Osagie, described the allegation as a fabrication by Ize-Iyamu and his cronies who he said had run out of lies to tell in their desperate effort to sell a bad product.

Osagie said, “This is another fabrication from Ize-Iyamu and his cronies who have run out of lies to tell in their desperate effort to sell a very bad product for the Edo governorship election.”

“When you have a candidate that is facing criminal charges for laundering N700m at the same time he is trying to campaign for an election, then you can imagine that they are left with no other choice than to tell cheap lies just to get ahead.”