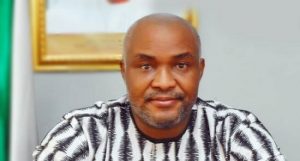 The Human Rights Writers Association of Nigeria, HURIWA, on Thursday asked President Mohammadu Buhari to arrest and detain his Service Chiefs rather than protesters over the spate of insecurity in the country.

HURIWA, an advocacy group said Buhari should arrest the Inspector General of Police, IGP Mohammed Adamu, Director-General of the Department of State Services, DSS, the Comptroller Generals of both Customs and Immigration and the Minister of Defence.

The group made the call while urging President Buhari to stop attacking, harassing, arresting and detaining protesters who are rightly demonstrating against the serious challenge of insecurity and breaches of national security in Northern Nigeria.

A statement by HURIWA’s National Coordinator, Emmanuel Onwubiko, reads partly: “If there is anybody to arrest and detain then the President should arrest the key figures who ought to ensure that there is national security and national stability, those directly in charge of national security such as the Inspector General of Police Mohammed Adamu; Director-General of States Services Department; Comptroller Generals of Customs and Immigration and the ministers of defence; Police Affairs and Interior.”

HURIWA, however, argued that the Service Chiefs were over-tasked and stretched and should be forgiven.

“These military Service Chiefs have been extremely over- tasked and overstretched with the huge war on terror which they have waged relentlessly for a decade and they have in most cases been asked to also carry out the routine internal security and policing jobs which are not necessarily their primary line of duty in line with the laws,” HURIWA added.