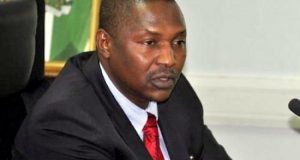 Attorney General of the Federation, AGF, and Minister of Justice, Abubakar Malami, has petitioned the Inspector General of Police over publications accusing him of massive corruption.

He wants the police to carry out comprehensive investigation into the “libelous and criminal defamation of his character and integrity”.

Malami had stated that he was traumatized by the allegations.

His petition signed by Sunday Ibrahim Ameh, SAN, is demanding apology and retraction.

It said under Malami, the extant National Anti Corruption Strategy was conceived, designed, approved by the Federal Executive Council and is currently being implemented.

The petition noted that his reappointment as AGF “is first of its kind and to our mind, a testimony of his unparalleled performance in office”.

Malami said there was a seeming coordinated internet/social media attack on him on July 10, 11 and 12, 2020.

He insisted that the articles were defamatory, with intention to ridicule him before the world.

The petition added that due to the publications, Malami “still receives several telephone calls and visits from well-meaning Nigerians, his friends and associates from all over the world”.

Ameh urged the IGP to act, adding that his client deserved justice.