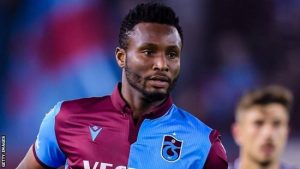 The former Chelsea midfielder became a free agent in March, after terminating his contract with Turkish side Trabzonspor over his refusal to continue playing for the side after the outbreak of the coronavirus pandemic.

Championship side, West Brom, on Saturday were reported to have shown interest in the player, but according to Tribal Football, West Ham are already in talks with the 33-year-old.

After quitting Trabzonspor, Mikel had been strongly linked with Brazilian sides Botafogo and Internacional, with the midfielder confirming the interest.

A report also linked him with Mexican club, Monterrey, which also didn’t materialised.

According to Tribal Football,  “there is a contract with the Hammers and talks are underway about next season.

“Ultimately, Mikel’s final decision will depend on whether the team in question is in the Premier League next season.”

Mikel had a successful spell with Chelsea, winning the Premier League, FA Cup, Champions League and the Europa League.