Earlier today, LIB shared the story of a woman that has been arrested for allegedly sending thugs to beat her husband because he slapped her. The man died after 10 days of the beating.

A friend of the lady Afy Francisca Okwechima, has taken to Facebook, to give an account of what happened.

According to Francisca, the man had subjected his wife to many years of domestic violence. When she couldn’t take it, she called in her brothers to beat the man up. Sadly he died 10 days later. Read her post below

I’m the founder of Afulenu cares foundation and these are the kind of situations we fight for. Its very sad you do not know the true story and all that glitters is not gold. I’m sorry my dearest friend and sister Princess Polachi Vivian , but I have to tell your story, she was 16 when her father died and due to poverty she was forced to marry Odi who was 40 then, she was a baby making machine, started giving birth from 17, Odi would only sleep with her for procreation and never showed her intimacy, he beat her up to stupor some nights she didn’t agree, she suffered from depression which led to her weight gain, she was unhappy and had no one to turn to until she registered herself at the stadium not a gym and not by Odi.

Now working out was the only thing that made her happy, when Odi saw the wife was happy he started his rounds of lies that she was being unfaithful and the beatings increased. Many times my friend will hide until her wounds heal, she will always say he is not perfect but at least he is taking care of the children. My friend endured the beating and domestic violence for 12 years but still kept quiet. Now the sister to Odi who is divorced came to live with them, instead of going to the one bedroom she insisted it’s her brothers house and decided to stay in the living room, princess disagreed and asked her to move to the one bedroom that it won’t be nice when visitors come to visit and see her in the parlour with her belongings so an argument started which led to Odi slapping Princess, as if that was not enough, the sister held princess hands while Odi punched and blew princess in his usual manner, she suffered a wrist and shoulder fracture, I have the report from the hospital and I will post pictures as well.

This beating happened on Saturday the 30th of March, now In 12 years of marriage princess has never retaliated but due to the beating she received, she sent the pictures to her family, the next day which was Sunday, the siblings arrived and wanted to know why Odi has been beating up their sister all these years and Odi asked them all to get out and this led to a confrontation and they all started fighting, the elder brother to my friend princess is younger and stronger so he was able to overpower Odi. Now Odi had some cuts and bruises, I’m not supporting taking laws into your hands but the beating was just to give him a taste of his own medicine, now unfortunately after 10 days Odi died, we couldn’t believe it bcoz the intention was just to beat him up so he won’t touch their sister again.

Now my friend with her broken wrist, shoulder, badly beaten face was arrested but when God is at work, you will suffer tribulations but he will always rescue his own, today I was at the police station after 6 days of her arrest and to God be the glory she has been released because the autopsy showed the real cause of his death, I have first hand information from the police and hospital so please before you defame anyone on social media please know the facts, I don’t support evil but I know many men who have fought their sister’s husband, even their daughter’s husbands for beating them up, domestic violence should not be supported no matter what, this is the whole truth about this case and God will vindicate my friend. I leave you with some of the pictures of my friend when Odi uses her as a punching bag, she endured for 12 years. 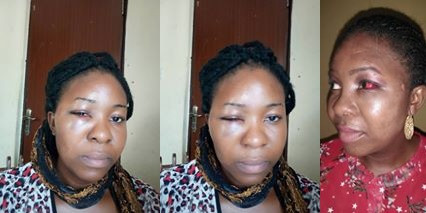 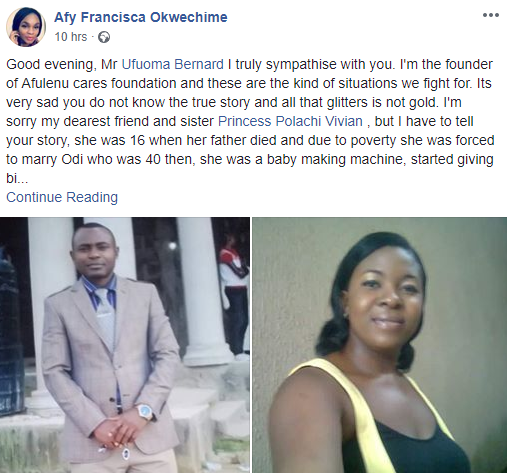