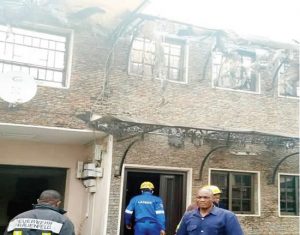 A twin-duplex was gutted by fire on Thursday on Femi Ayantuga Street, off Adelabu Street in the Surulere area of Lagos State.

The spokesperson for the Lagos State Emergency Management Agency, Nosa Okunbor, said in a statement that the cause of the inferno had yet to be ascertained, adding that there was no loss of life.

He stated that emergency responders, including the LASEMA response team, Lagos State Fire Service, Federal Fire Service and personnel of the Nigeria Police Force were on the ground to extinguish the fire.

He said, “Preliminary report on the fire outbreak at a twin-duplex on 39A and 39B Femi Ayantuga Street, off Adelabu Street, Surulere, had it that the detached twin-duplex was gutted by fire. The cause could not be ascertained as it emanated from 39A.

In another development, a yet-to-be-identified motorist was rescued after his vehicle rammed into a moving truck in the Mile 2 area of the state.

Okunbor said the victim might have been driving under the influence of alcohol when the crash occurred, adding that he was rushed to hospital for treatment.

He stated, “Similarly, in an overnight operation, LASEMA rescued a suspected drunken lone driver of a Toyota Camry car with number plate KSF 111 FA, when he lost control while on motion and rammed into a moving truck from behind at Sanya bus stop inward Mile 2.

“The vehicles were evacuated from the road with the agency’s heavy-duty equipment and were handed over to the Nigeria Police Force, Festac Division.

“Further investigation also revealed that the occupant of the vehicle, who was alone in the car, might have been driving under the influence of alcohol as a can of beer was found inside the car.

“In addition, the victim was handed over to a nearby hospital for medical care. The LRT, LASAMBUS, and Nigeria Police were all responders at the scene. The operation has been concluded.”