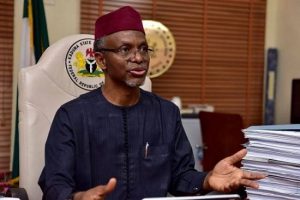 The Kaduna State Governor, Nasir El-Rufai has accused some clerics of instigating violence in the State.

El-Rufai said the clerics use their platforms to preach disunity rather than peace which would benefit the state.

He spoke yesterday at the state’s government House while playing host to the Primate of Anglican Church, Henry Ndukuba.

The governor, however, insisted that his administration has been able to contain violence at its point of origin.

He also disclosed that his administration is doing the best it can to find a solution to the violence in Kaduna.

According to El-Rufai: “Our study of the situation over four decades has shown that the main drivers of this violence are a few clerics that use their platforms, not to preach peaceful co-existence or promote our common humanity.

“Rather, they use their platforms and revered positions to divide and incite violence. I was sad to hear from the primate that he was a victim in 1987, when his house was burnt down in Wusasa, Zaria.

“In those days, the primate will recall that this sort of violence starts from one part of the state and spreads all over the state.

“One credit that this government gets from everyone, including our adversaries, has been our ability to contain these outbreaks to their points of origin.”

Kaduna State has witnessed some measure of violent conflict with the Southern part of the state being the most hit.

Only recently, some gunmen believed to be Fulani herdsmen had invaded communities in Southern Kaduna and killed over 20 people while several others were injured.