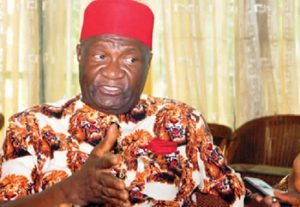 A new Ohanaeze Ndigbo General Assembly has been registered with the Corporate Affair Commission and purportedly taken over the leadership of the Igbo apex socio-cultural organisation.

The traditional ruler of Igbariam in Anambra East Local Government Area of Anambra State, Dr Nkeli Nzekwe, announced this on Sunday while inaugurating the new group in his palace and himself as its Board of Trustees chairman.

This is as the President General of Ohanaeze Ndigbo, Chief Nnia Nwodo, described the new group as rabble-rousers and buccaneers, adding that Igbo people were wise enough and cannot be deceived by such group.

Speaking, Nzekwe said the new order was that the Igbo group had become a legal personality that could sue and be sued and no longer a self-serving platform.

Speaking, Nzekwe said henceforth, the new leadership would pilot the affairs of the Igbo worldwide to the exclusion of anybody on the saddle before the incorporation of the group.

“As the Chairman, Board of Trustees of the organisation, I call on Ndigbo all over the world to join hands together and make Ohanaeze Ndigbo great again.

“I’m one of the founding members of Ohanaeze Ndigbo in 1976. After the Nigerian civil war, some Igbo patriots and I came together to discuss the way forward for Ndigbo with the good intention to unite Ndigbo under a common umbrella body.

“This initiative was much welcomed by our people considering the maximum displacement of Ndigbo during the war and its aftermath. Our principal aim then was specifically to unite Ndigbo and speak with one voice.

“It was unfortunate that the organisation later lost its principal focus and degenerated to a political tool in the hands of some greedy politicians, which created room for the formation of several Igbo organisations, due to lack of confidence in the affairs of Ohanaeze.

“On the 25th of November 2019, some notable Igbo stakeholders visited my palace to discuss the way forward on how to restructure Ohanaeze Ndigbo and give it a corporate legal status instead of merely existing as a pressure group and a political tool in the hands of few individuals.

He said throughout the 44 years of the existence of the Igbo apex group, it was not registered at the CAC nor recognised by notable international bodies as a corporate personality.

Nzekwe added, “I am glad to announce to the general public today (Sunday) that Ohanaeze Ndigbo General Assembly is now registered with the Corporate Affairs Commission with the RC NO: 144918, under the present leadership of Barrister Basil Onyeachonam as the President General.

Reacting, the President General of Ohanaeze Ndigbo, Chief Nnia Nwodo, said the new group was being used by some politicians to cause disaffection in Igbo land, adding that the Nwodo-led Ohanaeze Ndigbo was able and intact.

Nwodo added, “Ohaneze does not need such registration they are talking about to function as an entity. The Igbo group has been in existence before most of those boys were born.

“The young men are just being used to create confusion in Igboland. The Chairman of our BoT is Obi of Onitsha, Igwe Nnaemeka Achebe. Prominent Igbo leaders are in Ohanaeze; Chukwuemeka Ezeife, Prof Ben Nwabueze, SAN, South-East governors, among others. So, what are they talking about?”