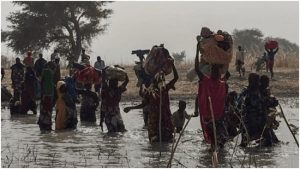 Over 32,000 internally displaced persons said to be living in Dalori IDP camp, Borno State, scampered for safety on Sunday following the sound of explosions and sporadic gunshots in the area.

Residents of Dalori, an outskirt community in Maiduguri, the Borno State capital told WE4WE REPORTS that they cannot ascertain whether it was a Boko Haram attack or the military trying to exercise show of force.

Dalori community has been attacked severally at the height of the insurgency but for some time now, the area has enjoyed some peace until this evening when the sound of explosions began.

“By morning we should be able to know exactly what was going on, but for now, many IDPs, including us, are in hiding. Some have fled the camp into the community,” a resident who does not want his name in print told our correspondent on phone.

The blast and sporadic gunshots, heard in different parts of the metropolis, lasted for over one hour.