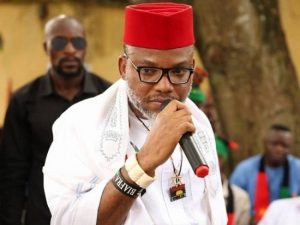 Nnamdi Kanu, leader of the Indigenous People of Biafra, IPOB, on Friday, revealed why the Nigerian military has not been able to defeat terrorism.

Kanu pointed out that President Muhammadu Buhari’s love for terrorists has made it difficult for military to defeat them.

He made the remark on his Twitter page in response to a comment on the offense of the military against Boko Haram.

In a tweet, the IPOB leader stated that the United States, US, was able to defeat ISIS and Al Qaeda due to the country’s hatred for these terrorist groups.

He wrote: “Terrorists are never defeated by those that love them but by those that hate them. America defeated ISIS and Al Qaeda because of its justified hatred for terrorism.