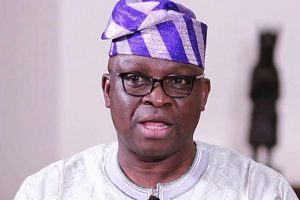 A former Governor of Ekiti State, Ayodele Fayose, said on Thursday that the crisis rocking the All Progressives Congress was “a show of God’s anger against the governing party.”

Fayose said the crisis was the price for “the role of APC and that of its government in impoverishing Nigerians, promoting election rigging and looking the other way while Nigerians are being killed in their thousands.”

The former governor’s views were contained in a statement titled, ‘God is visiting APC with anger, more confusion coming.’

Fayose’s statement was released by his media aide, Lere Olayinka.

He said, “This is just the beginning; their matters will be made worse with time.

“For Nigeria to return to the path of progress that it was before the APC took over power, more confusion will still hit the party till it goes into oblivion.”

Fayose lamented the killings by bandits in the North’ especially Katsina, Kaduna, Zamfara and Sokoto states.

He said, “God will never be happy with a party that its government is doing nothing to stop the bloodshed, raping of women, including children, and destruction of people’s sources of livelihood going on in the country.

“It is on record that more than 300 Nigerians have been brutally murdered by bandits in the last three weeks and the APC government has done nothing.”