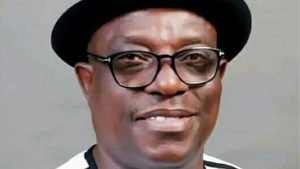 The two factions of the All Progressives Congress on Thursday continued their battles for the control of the party.

The APC Deputy National Secretary, Victor Giadom, who,  on Wednesday, declared himself as the acting national chairman after the Court of Appeal suspended the substantive Chairman, Adams Oshiomhole, on Thursday obtained a court order affirming him as the acting chairman.

But the pro-Oshiomhole faction led by Senator Abiola Ajimobi began consultations with the APC stakeholders in the South-South with the aim of replacing  Giadom as the deputy national secretary.

It also went ahead to inaugurate its primary and appeal committees for the Edo State governorship election.

The leadership crisis in the ruling party began on Tuesday when the Court of Appeal sitting in Abuja upheld the judgment of the FCT High Court, which suspended Oshiomhole as the national chairman.

On Tuesday night, the APC National Working Committee held an emergency meeting, where Ajimobi, who is receiving treatment for COVID-19 in a Lagos hospital, was appointed acting chairman.

But on Wednesday morning, Giadom, who cited an order given by the Abuja court in  March, declared himself as the acting national chairman.

On Thursday,  the High Court of the Federal Capital Territory, Abuja,  extended its March order, which allowed Giadom to act as the national chairman.

The court permitted  Giadom to act as the national chairman of the party for 14 days.

The plaintiff’s counsel, Wole Afolabi, on Thursday applied to the court for an extension of the interim order.

The judge cited Rule 3 of the COVID-19 Practice Direction of the FCT High Court.

The order read, “Consequent and in line with Rule 3 of the COVID-19 Practice Direction of the FCT High Court, 2020, the order of this court made on the 16th day of March, 2020 is hereby extended for a period of two (2) weeks.

The court also allowed,  Salihu, to act as national secretary pending the determination of the substantive suit.

Salihu had in the suit  sought an interim order allowing Giadom to pilot the affairs of the party as acting chairman.

He had also in the motion sought an order allowing Giadom to preside at all meetings of the party’s NEC.

The applicant also sought an interim order restraining the APC and its officers or anyone purporting to act as an officer of the 4th defendant ( the APC)from preventing or in any way disturbing Giadom from functioning as the acting chairman.

The lawyer to  Giadom, Afolabi, who appeared on a Channels’ Television Programme, Politics Today, in Abuja on Thursday, argued that by virtue of the latest court order, Giadom was the APC acting national chairman.

“As of today, Victor Giadom is the Acting National Chairman until a national convention is held.”

We have not been served – APC

When contacted, the APC national legal adviser said, none of the orders being flaunted by Giadom and associates had been served on the party.

He spoke during a Channels Television Political Programme, Politics Today. He said,  “The only person vested with authority to coordinate, receive processes and institute actions on behalf of the party is the National Legal Adviser, no other person has the power, and that is me. I have not been served any of these processes.”

But there was a  crack in Giadom’s camp as his ally,  Salihu, dissociated himself from the fresh order which asked him to take over as national secretary of the party.

Mustapha told reporters in Abuja on Thursday that he was not a party to the suit and that it was impossible for him to be a party to the suit because he convened the virtual Zonal Executive Council meeting where the appointment of Bulama as APC National Secretary was ratified.

Salihu said, “My zone, the North -East has already nominated  Waziri Bulama in the presence of the Senate president, the APC governors from the zone and other party stakeholders as the acting national secretary. I was at the meeting where this decision was reached. So why now would I go back to obtain a court order to act as national secretary?

“I was not part of such shenanigans. It is not in my character to play such dirty politics and I condemn in strong terms those behind the act. At a time like this when the party is going through trying times, it is such a time that all lovers of the party must come together to keep the party running.”

In a fresh move,  Ajimobi-led NWC asked the South-South geo-political zone to nominate a replacement for  Giadom.

This was part of the decisions reached during the NWC meeting held on Wednesday.

Eta, in an interview with journalists on Thursday, said the party made a mistake naming Giadom as the deputy national secretary.

He stated that Giadom resigned to contest as deputy governorship candidate of the party in Rivers State in the last general election.

Eta stated,  “So, in the wisdom of the NWC, they have now asked us in the South-South to bring forth a name to fill that vacancy that has been created.

“I think we should be very clear on this; I think whatever mistakes, whatever missteps have been done cannot vitiate the grand law of the party, which is the Constitution of the party.”

He said he had written to the Rivers State chapter of the party to nominate a person who has the finesse and passion for progressive politics as Giadom’s replacement.

Also on Thursday, the NWC led by Ajimobi inaugurated the election and appeal committees for the Edo State primary, at the national secretariat of the party.

In his remarks, Ajimobi said the party had commenced the process of conducting the Edo State governorship primary with the inauguration of the committees.

He further said, “So, we are almost at the culmination of that process. It is with deep humility that I want to announce to Nigerians that those we have selected to do this onerous and herculean job for the party were carefully selected, some of the finest and best amongst us.

“Their job is very simple, to carry out the process of selecting the flag bearer of the party in Edo State and we know that after that exercise, there may be concerns, disagreements, that is why we have constituted members of the APC governorship Primary Election Appeal Committee.”

Responding on behalf of other members, Uzodinma assured the leadership of the party that the committee would ensure justice.

Uzodinma said the executive order put in place by his Edo State counterpart, Godwin Obaseki, provided an enabling environment for the party to proceed with its direct mode of primary as planned.

He expressed these views while speaking to journalists after his inauguration as chairman.

Uzodinma said, “In their (NWC) wisdom.  I have been appointed to chair the committee to conduct the primary, I have been given the guidelines to drive the exercise.

“You are aware there is also a global pandemic, COVID-19 and there are some local laws in Edo State. There is a law that does not allow more than 20 people to gather at a place, that is the beauty of direct primary.

“When we get to Edo, we will deploy the necessary manpower to the various polling units with instructions that will not violate the local legislation that will enable our members not to gather more than 20 people at a place and by so doing, with a segmented approach, we will conduct a free and fair primary and our party will be happy for that.”