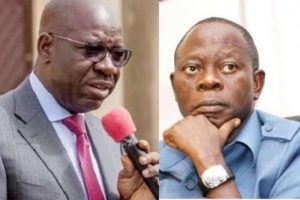 The All Progressives  Congress and the Governor Godwin Obaseki administration in Edo State are set for a showdown over the APC primary election holding  today (Monday)  in the 192 wards of the state.

The   Edo State APC  governorship election committee headed by the Imo State Governor, Hope Uzodinma, which on Sunday released guidelines for the party primary election, insisted that the exercise would hold in all the 192 wards in the state.

But the state government said, in compliance with its COVID-19 law, the APC must apply for a waiver before organising a political gathering in any part of the state.

It alleged that the APC had imported thugs into the state with the aim of causing destruction of lives and property.

The state government had on May 28 gazetted regulations aimed at preventing the spread of infectious diseases, including COVID-19.

Obaseki’s  Special Adviser on  Media, Mr Crusoe Osagie, had on Monday last week, explained the law to one of our correspondents.  He said any party that wanted to organise a gathering must apply for a waiver from the state government and that such must be held in one location.

But on Sunday, the APC committee said its guidelines were in compliance with the state government’s COVID-19 regulations.

A statement by the Secretary of the APC committee, Dr Ajibola Basiru,  said voting would commence simultaneously at 8am at the 192 wards in the state.

It insisted that not more than 18 persons would be allowed to gather at the same time from the commencement of voting till the end of the exercise when results would be announced.

The party said, “That the process of the election of the candidate of the party shall commence at 8am on Monday, June 22, 2020 at the various wards in all the local government areas with strict compliance with Edo State’s extant law prohibiting gathering of more than 20 persons.

“There shall be simultaneous accreditation and voting in batches as aforesaid until all eligible members have cast their votes without violation of the state’s COVID-19 regulations.

This, he said, would enable the government to assess the APC programme for the primary election if it is in conformity with its law on COVID-19. Osagie, however, noted that the APC was behaving as if it was above the law.

He stated that as of 7pm on Sunday, the APC had yet to apply for a permit for the primary election as stipulated by the state COVID-19 law.

Also, the Secretary to the State Government, Mr Osarodion Ogie, in a statement on Sunday, said the President should caution the APC.

He stated that all political parties holding primary elections should abide by the state “Coronavirus (COVID-19) Quarantine Regulations and the Government’s Gazette on political gatherings during this pandemic.”

According to him, these guidelines were issued in fulfilment of government’s statutory duty to ensure the protection of lives and property in the state, in the wake of COVID-19 pandemic.”

He noted that the APC was acting in defiance of the law. The SSG stated, “We note with concern that all the political parties conducting primary elections in Edo State have notified the government of their readiness to comply with the extant laws and COVID-19 regulations, except the All Progressives Congress.

“The APC appears resolved to carry on with the conduct of their primary election in violation of the Edo State COVID-19 Quarantine Regulations and the State Government’s Gazette on political gatherings in a pandemic.”

He alleged that the APC had imported thugs into the state to actualise its illegality.

The SSG stated, “We also have it on good authority that these persons have imported thugs into the state to actualise this illegality, further threatening the peace and security of our dear state. In light of this, we want to state unequivocally that the Edo State Government will spare no expense in upholding the law and protecting the lives of our people. We will ensure we identify and prosecute anyone who engages in this illegality and their collaborators, should they proceed with this unlawful conduct.”

“We also want to appeal to the Presidency, President Muhammadu Buhari, the Inspector-General of Police, the Department of State Services, and other security agencies to prevail on those behind this act of lawlessness, to desist forthwith with their planned activity.”

We’re  not  under any obligation to seek Obaseki’s permission,  says APC panel

The Secretary of the APC committee said that his panel was not obliged to inform the state governor about the guidelines for the party”s primary slated for Monday.

He said, “We are not obliged to share the information with them. The state is now a PDP state.

Our guidelines are in line with the state COVID – 19 regulations because we will not be more than 18 people at any polling unit.

“There will not be congregation of more than 18 people so we are not going against the governor’s COVID-19 regulations. We don’t need his permission. “

Efforts to speak with the acting factional Chairman of the Edo State APC, Col. David Imuse (retd.), proved aborted as he did not pick phone calls.

But the Director of Communication and Media, Pastor Osagie Ize-Iyamu Campaign Organisation,  Mr John Mayaki, described the governor claim as an alarmist.

He said,  “A day after he assembled hundreds of youths at the PDP secretariat without social distancing or any form of protection, the governor laid claims to Edo State COVID-19 Quarantine Regulations and the state government’s gazette on political gatherings and falsely accused the party (APC)of violating these guidelines.

“We wish to clarify to the public that unlike Governor Godwin Obaseki, the All Progressives Congress and its officials in Edo State are law-abiding.”

Meanwhile, the President has summoned some APC  governors to a meeting on Monday as part of efforts to resolve the leadership crisis in the party.

A source in The Presidency, who confided in one of our correspondents, said he was hopeful that the APC crisis would be resolved within the week.

The source also disclosed that Buhari had set up a committee with a view to reconciling the warring parties in the APC.

The crisis in the party reached its peak on June 12 when its leadership disqualified the Edo State Governor, Godwin Obaseki, from contesting the governorship primary holding today.

The party cited contradictions in Obaseki’s certificates as reasons for his disqualification from the governorship primary.

Following his disqualification, Obaseki resigned his membership of the party and joined the Peoples Democratic Party on whose platform he planned to seek re-election.

A fresh leadership crisis hit the party on Tuesday when the Court of Appeal sitting in Abuja upheld the judgment of the Federal Capital Territory High Court which suspended Adams Oshiomhole as the national chairman.

As part of efforts to resolve the crisis, one of our correspondents learnt on Sunday that Buhari had scheduled a meeting with some state governors elected on the platform of the party.

A  source in the Presidency said the meeting will hold at the Presidential Villa, Abuja on Monday (today).

He stated, “It is not correct to say that the President is not concerned or that he is not doing anything about the crisis.

“I can confirm to you that for instance, he will be meeting APC governors on Monday to discuss and look at how the matter can be resolved,” the source said.

Apart from the meeting with the governors, one of our correspondents further learnt that Buhari had set up a committee saddled with the responsibility of resolving the crisis.

Members of the committee, it was learnt, had started engaging all parties in the crisis and are hopeful that the matter would be resolved this week.

A close ally of the President and former Minority Leader of the House of Representatives, Farouk Aliyu, confirmed the setting up of the committee to our correspondent on Sunday.

Aliyu, who is part of the committee, did not, however, disclose the identities of other members.

He said, “The President has set up a committee which is meeting today (Sunday) and tomorrow (Monday). Definitely, all things will be sorted out this week.

“Something very tangible is being done by the President and members of the committee are working hard to get the matter resolved.

“I am telling you that Mr President is on top of this matter and within this coming week, we will see the resolution of the crisis within the party.

“The high powered committee is currently talking to the various warring parties within the party. I can assure you that the crisis will be resolved soon.”

Governor Abdullahi Ganduje of Kano State will attend the meeting of the APC governors with the President.

The Special Adviser on Media to the governor, Salihu Tanko-Yakasai,  indicated this in an interview with WE4WE REPORTS on the telephone on Monday

“Yes, Governor Abdullahi Ganduje is also attending the meeting with other APC governors.  The Governor is leaving Kano for the meeting tomorrow (Monday) morning,” Yakasai said

Giadom was given a waiver, he didn’t resign – Mustapha

Meanwhile, the APC  National Vice Chairman (North East), Salihu Mustapha, on Sunday, faulted a claim by his colleagues in the party’s National Working Committee that  Giadom resigned from the party to contest as Deputy Governor of Rivers State.

Mustapha, in an interview with journalists in Abuja said  Giadom was granted a waiver by the NWC to contest the election and that he properly notified the party in writing about his return when he did so.

Waiver given in error – APC

But the APC National Publicity Secretary, Mallam Lanre Issa-Onilu said if a waiver was given to Giadom, it must have been done in error.

“Assuming but not conceding that such a waiver was granted like my colleague said, it was done in error,” he stated.

The President of the Senate, Ahmad Lawan, on Sunday said the crisis rocking the ruling APC must not be allowed to degenerate further because the party’s stability would go a long way in determining the stability of Nigeria.

Lawan said this in an interview with State House correspondents shortly after he met with the President at the Presidential Villa, Abuja.

He said he discussed the issue and the need to address it frontally with the President, who is the leader of the party.

Crisis resolution actions will be taken this week – Senate president

He disclosed that in the next few days, certain actions would be taken to resolve the crisis. He however did not reveal the promised actions.

Lawan said, “I had the opportunity to talk to my President and my leader about the challenges in the APC. I believe that we have to deal with these challenges. This is the ruling party that produced the President, with the control of the National Assembly and with more governors than any other political party.

“The situation should not and must not be allowed to degenerate further than it has. I believe that we must go into the constitution of our party and see how we are to address this but we must not allow this to continue as it is today.

“This is because the stability of the APC is the stability of Nigeria. This is the party that is running the affairs of this country. So, I believe that we have to sort this out and that will make our work even better and easier when we have a stable party.

“So, I had the opportunity to discuss that with the President who is the leader of the party in Nigeria and by the grace of God in the next few days, we will see certain actions will be taken and we are praying that all our leaders in the party across the country will make every possible effort to get the party reconciled.”