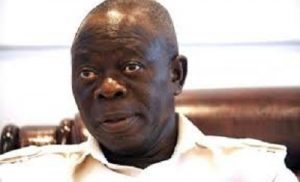 A lawyer and member of the All Progressives Congress, Charles Ude, has asked the Federal High Court in Abuja to declare as null and void all the decisions taken by Adams Oshiomhole as the national chairman of the party from November 2, 2019, till June 16, 2020, when the Court of Appeal in Abuja affirmed his (Oshiomhole’s) suspension from office.

The plaintiff through his lawyer, Francis Ubalim, also asked the court to declare the Deputy National Secretary of the party, Chief Victor Giadom, as the only one that could act as national chairman of the party.

In a suit filed on Friday, Ude maintained that all the decisions taken by Oshiomhole as the national chairman of the party from November 2, 2019, when the party at his Ward 10, Etsako West Local Government Area of Edo State suspended him as a member, till when the suspension was affirmed by the Court of Appeal on June 16, 2020, were liable to be set aside.

Those joined as defendants in the suit marked, FHC/ABJ/CS/640/2020, include the APC, Oshiomhole, Giadom, and the ailing former Oyo State Governor, Abiola Ajimobi, who was appointed by the APC’s National Working Committee to act as the party national chairman.

Also joined as a defendant is the party’s National Vice-Chairman South-South, Hilliard Eta, appointed by the party’s NWC pending when Ajimobi would recover from his ailment.

The rest of the defendants are the Independent National Electoral Commission, the Inspector-General of Police and the Director-General of the Department of State Services.

In a separate motion on notice filed along with the suit, the plaintiff sought an order of interlocutory injunction restraining the 6th, 7th and 8th defendants (INEC, IGP and the DG of DSS) “from dealing, communicating or howsoever recognising any person other than the 3rd defendant as the National Chairman of the 1st defendant (APC) for any party business or carrying out any duties vested on the Independent National Electoral Commission under the Electoral Act.”

Meanwhile, a Rivers State High Court sitting in Port Harcourt, on Friday, restrained the former Deputy National Secretary of the APC, Giadom, from the capacity of acting national chairman of the party.

The court, presided over by Justice Florence Fiberesima in the suit filed by Dele Moses & Others, granted an order of perpetual injunction also restraining Giadom from parading himself as a member of the National Working Committee of the APC.

The court further stopped Giadom from issuing, signing or endorsing any document or correspondence to the Independent National Electoral Commission or any other body or institution in the capacity of the National Chairman or acting National Chairman of the APC or howsoever as an officer of the APC.

Fiberesima ordered that Giadom could not claim to be a member of the NWC after resigning from his position to contest the 2019 general elections as deputy governor.