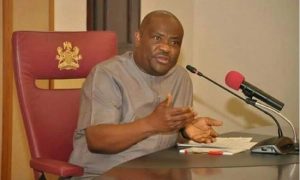 Some Nigerians have reacted to the rescue of Joy Nunieh, a former Director-General of the Niger Delta Development Commission from police officers by the Rivers State Governor, Nyesom Wike.

Some police officers had in the early hours of Thursday invaded Nunieh’s residence in Port Harcourt.

But Wike had stormed the residence of the former NDDC boss and took her away.

Nunieh had a few days ago accused the Minister of Niger Delta Affairs, Godswill Akpabio of sexual harassment and fraud among other things.

Akpabio, however, denied all the allegations leveled against him by the former NDDC MD.

However, Nigerians who expressed their opinion commended Wike for coming to Nunieh’s rescue following reports of police invasion of her residence.

Tweets gathered by some Nigerians in response to Wike’s action read below:

@SodiqTade: “I’m not surprised about the whole drama though. That is why this country is Nigeria. She must have been expecting the intimidation as well. Just that Akpabio picked the wrong location. He should have known Wike to be a no nonsense man. For that Niger Delta, Wike is the war.”

@PHCinpictures: “Whatever you do in this life. Never ever mess with a Governor who carries cutlass.

@DeeOneAyekooto: “Wike did a similar thing when some years back, the DSS stormed the home of judges. He resisted them in Port Harcourt. IGP claimed it didn’t order Magu’s arrest, so who did? People are just behaving like there’s no one in charge of the country.”

@supergirlwcw: “A friend in need is a friend indeed. Rivers People will not be intimidated never! This is who Wike is. If he stands by you, he stands unwavering till the end. I love my Governor. Joi Nunieh fear not! Joi Nunieh is now on her way to Abuja. AkpabioThumbs down.”

@ayemojubar: “NDDC, Akpabio, Joi Nunieh: We are not only in the midst of a pandemic, we are also at the center of heistdemic, scamdenic and hushdemic at every angle under Buhari’s watch.

“Nigeria, where is your president? We can’t continue with this insensitivity for the next 3 years.”