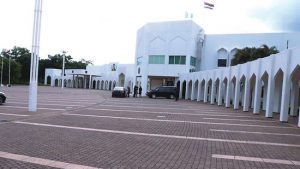 President  Muhammadu Buhari has ordered the redeployment of about 20 presidential bodyguards over the recent shooting incident at the State House, Abuja.

The personnel, from the Department of State Services and the National Intelligence Agency, were withdrawn from the Presidential Villa over their failure to manage the situation, which led to the firing of gunshots within the Villa penultimate Thursday.

They are expected to be replaced with new ones immediately.

The shooting sparked panic that the President was in danger, but the Presidency later disclosed that Buhari had ordered a probe into the incident.

The shooting occurred when the President’s wife, Aisha, and three of her children –Zahra, Halima and Yusuf – as well as some of her security aides, led by her Aide-de-Camp, CSP Usman Shugaba; and the escort commander, DSP Sheriff Kazeem, stormed the residence of a nephew and Personal Assistant to the President, Sabiu Yusuf, at House 8 by the Pilot Gate of the Presidential Villa, at night.

The security operatives were detained on Friday, but were released on Monday.

Sources informed WE4WE REPORTS on Thursday that the bodyguards were fired by Buhari on Wednesday after a review of the incident, as well as the breach of Presidential security, which occurred in Kebbi, Kebbi State, on March 13, 2020.

The official said, “About 20 bodyguards were posted out of the Villa on Wednesday for the incident involving the security aides to the President’s wife and other past issues.

“These include the incident in Kebbi, when someone attempted to breach the Presidential security while the President was taking photographs with the Kebbi State Governor and other dignitaries.”

Buhari was in Kebbi to declare open the Argungu Fishing and Cultural Festival, when an intruder, identified as Mohamed Gundarre, rushed towards him.

Gundarre later explained that he simply wished to shake hands with the President, stating that he did not know that his action amounted to a security breach.