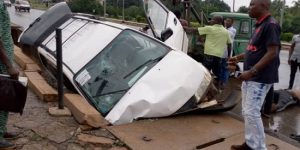 Two persons died in an auto crash on Friday on the Onitsha/Owerri Expressway, Anambra State while 12 others sustained varying degrees of injury.

He said 15 persons – 10 adult males and five adult females – were involved in the crash.

He said, “12 people sustained serious injuries, out of which seven were rushed to Our Lady of Lourdes Hospital. The other five victims were rushed to God’s Favour Hospital Okohia, both in Ihiala town.

“Two victims, the driver whose leg was amputated in the crash and another victim were confirmed dead by doctors at the hospital.”