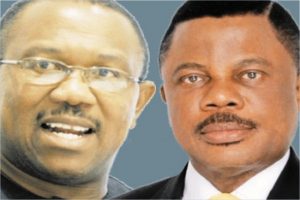 The Anambra  State Governor, Willie Obiano, and his predecessor Peter Obi, have disagreed again over road projects in the state.

This came six years after Obi handed over to Obiano the affairs of the state.

The two had earlier disagreed on an alleged N75bn left into the coffers of the state  by the Obi administration in 2014 when Obiano took over the governance of the state.

On Sunday, the two renewed their war of words over road projects in the state.

While Obiano claimed his predecessor bequeathed to him a huge burden of 96 uncompleted road projects.

The governor, who spoke through his Chief Press Secretary, James Eze,  added that Obiano had “completed about 51 out of the 96 roads.”

In response, a former Commissioner for Information in the Obi government,  Joe-Martins Uzodike debunked Obiano’s claim.