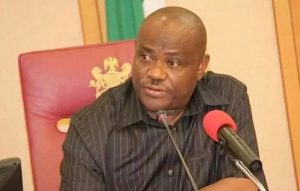 Governor Nyesom Wike of Rivers State has described the governorship candidate of the All Progressives Congress in Edo State, Osagie Ize-Iyamu, as “a bad product that won’t sell during the Edo governorship election.”

Wike spoke in his capacity as the Chairman, Peoples Democratic Party Edo State Governorship Campaign Council during an interview with a national television network in the state.

He drew his conclusion from analysis of facts deduced from the previous governorship elections in the state.

According to a statement on Friday, signed by the Rivers State Commissioner for Information and Communications, Paulinus Nsirim, the governor said the erstwhile APC National Chairman, Adams Oshiomhole, had exposed the true identity of the Edo APC governorship candidate.

Nsirim, quoting Wike added that it was an insult to the Edo people for Oshiomole to reverse his earlier position and ask Edo electorate to accept Ize-Iyamu.

He said, “Adams Oshiomhole told Edo people that Ize-Iyamu was rusticated from school, that he poured acid on a fellow student which destroyed his manhood; that he is an armed robber that cannot be trusted with money. Such  a character cannot be accepted by Edo people as governor during the election.

“I respect the Benin tradition and I know that Edo people are educated to know that Oshiomhole cannot play on their intelligence. If he is now retracting what he said about Ize-Iyamu, who is sure that he’s saying the correct thing now?”

The governor further stated, “Adams Oshiomhole’s sudden U-turn is a great insult to Edo people. This is an opportunity for Edo people both at home and in the Diaspora to use their votes to tell Oshiomhole that they cannot take his lies anymore.”

Reacting, the Chairman, Edo State APC Campaign Council, John Mayaki, said, “The real bad product is the dying PDP and its band of tax-collectors as described by the same man, Governor Nyesom Wike, who alerted the world to how the leaders of his party sold its ticket to Mr. Godwin Obaseki.

“They are stuck with a man they roundly condemned as a failure. The verdict of the PDP on the third anniversary of Obaseki’s administration is available for all to read.

Meanwhile, Obaseki has accused the leadership of the APC in the state of planning violence and importing arms to intimidate and harass his supporters as the September 19 governorship election draws near.

The governor said this while receiving Muslim leaders at Government House in Benin City.