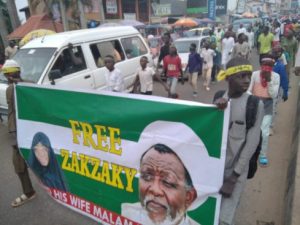 Members of the Islamic Movement in Nigeria, also known as Shiites, on Friday protested the continued detention of their leader, Sheikh Ibraheem El-Zakzaky, and his wife, Zeenat, in Kaduna State.

The IMN members including their children marched from Kano Road Juma’at Mosque by Ahmadu Bello Way and ended at Broadcasting Road in the Kaduna metropolis.

They called on the Federal Government to unconditionally release the leader of the sect for proper medical attention.

The leader of the protesters, Sheikh Aliyu Tirmizi, said, “In the aftermath of Zaria genocide executed by the Nigerian military in December 2015, we have been calling on all citizens to uphold the dictum that injustice to one is injustice to all, but to no avail.