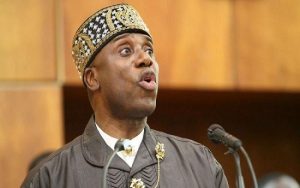 More prominent Nigerians will still benefit from the Federal Government’s naming of railway stations across the country.

Minister of Transportation Rotimi Amaechi, said this in a statement by his Media Assistant, Mrs Taiye Elebiyo-Edeni.

Before the statement, Nigerians had wondered why former President Olusegun Obasanjo and other prominent Nigerians had no rail stations named after them.

WE4WE REPORTS reported that President Muhammadu Buhari had approved the naming of some railway stations along the Lagos-Ibadan corridor and others on the Itakpe-Ajaokuta/Aladja-Warri line after some Nigerians.

For the Itakpe-Ajaokuta/Aladja-Warri railway, the beneficiaries and the stations assigned to their names include Adamu Attah, Itakpe Station; Dr Olusola Saraki, Ajaokuta Station; and Admiral Augustus Aikhomu, Itogbo Station.

Earlier, the General Secretary of the Nigerian Union of Railway Workers, Mr Segun Esan, demanded the immediate reversal of the naming of the Apapa Railway Station to late Mohammed.

The FG had recently named the Apapa Railway Station after Tinubu.

Mohammed, until his death, was the Chairman of the Nigerian Railway Board.

He said it would be proper to name the Apapa Station after Mohammed, who died while in active service, as a mark of his sterling contributions to nation-building.

But Amaechi said a bigger railway station would be named after the late Alhaji Waziri Mohammed.

“We are naming a bigger station after Waziri Mohammed,” he added.