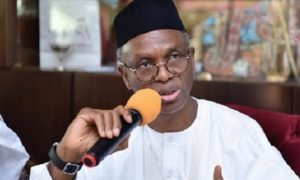 Kaduna State Governor, Nasir El-Rufai, has said medical doctors and other health workers threatening to embark on industrial action in the state risk losing their jobs, noting that his administration would not “bow to blackmail”.

In a statement on Thursday night by his Special Adviser on Media and Communication, Muyiwa Adekeye, the governor said he would keep the health facilities in the state running and protect workers who are willing to work.

Responding to the strike notice served by health workers in the state, El-Rufai said it is “criminal” to declare a strike action amidst the coronavirus pandemic.

He said his government would not be bent by the strike action into excluding health workers from the mandatory donation of 25% salary by all civil servants to fund the provision of palliatives for vulnerable people impacted by the lockdown.

He said, “The government rejects the strike threat and will regard persons who fail to show up at their assigned places of work as having forfeited their employment. Every health worker that is willing to work is required to sign the register at the Ministry of Health and the health institutions to which they are deployed.

“The Ministry of Health has the mandate of the government to ensure that residents of Kaduna State are not deprived of public health services.

“The state government will not be misled into granting health workers a special status amongst public servants. The consequences of concessions made along such lines by previous governments have created a sense that some public servants are more precious than others.”