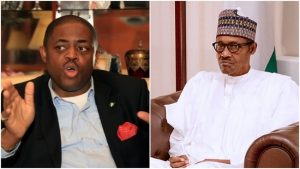 Femi Fani-Kayode, former Aviation Minister, has faulted the appointment given to President Muhammadu Buhari by the Economic Community of West African States, ECOWAS.

Recall that ECOWAS had appointed Buhari as the ‘Champion that will coordinate the COVID-19 response in West Africa.”

Buhari’s appointment was disclosed by his spokesperson, Femi Adesina.

Adesina had said Buhari’s appointment was made during a video conference on Thursday.

In a tweet, the former minister stated that the President can barely manage himself, hence the possibility of managing a sub-region was in doubt.

He wrote: “The greatest mistake that the ECOWAS leaders have made is to appoint @MBuhari as the leader of the fight against Covid-19.

“This is a cataclysmic error which they will deeply regret. He can barely manage himself and now you ask him to manage a sub-region of 400 million people?”