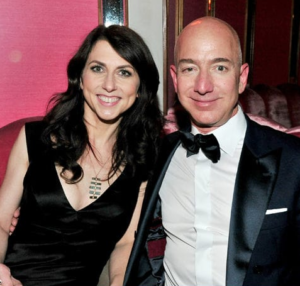 Yesterday, Amazon CEO Jeff Bezos announced that he and his wife, MacKenzie, are heading for a divorce after 25-years of marriage.

Now it has been revealed that the couple who have four children together don’t have a prenuptial agreement.

According to TMZ, the couple will file divorce docs in Washington, where community property rules that all earnings and income during the marriage are split 50/50, meaning over $137b is at stake.

Bezos is currently in a relationship with former “So You Think You Can Dance” host Lauren Sanchez, who’s also in the middle of divorcing her estranged husband, talent mogul Patrick Whitesell.

In case you don’t know, Lauren and Patrick were super close to Jeff and MacKenzie for a decade

Jeff Bezos’ company is now the most valuable company on the planet worth nearly $810 BILLION. He and McKenzie own a total of 400,000 acres of property, making them two of the biggest landholders in the country.

The couple who live in Washington, which is a community property state got married in 1993 long before Bezos became rich. He became a millionaire in 1997.